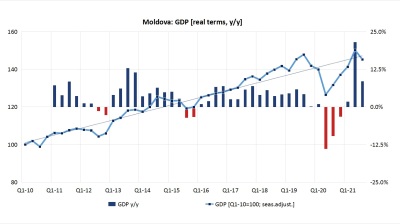 The Moldovan economy grew by 8.3% y/y in the third quarter of this year slowing down from the 21.5% y/y growth in the previous quarter, according to the National Bureau of Statistics (BNS).

In real terms, Moldova’s economy expanded by 10.3% in January-September, fully reversing the 8.2% y/y contraction in the same period last year.

Economic growth in Q3 was mainly influenced by the better situation in agriculture, where gross value added (GVA) increased by 28.6% (contributing to GDP growth by 3.9pp) and a share of 16.7% to GDP formation. This was particularly driven by the year's rich harvest.

At the same time, the sector of services to households increased by 3.5% y/y.

In financial and insurance activities the increase was 6%, in real estate transactions 0.9%, and in information and communications only 3.4%.

In contrast, the construction sector (9.7% of total GVA formation) contracted by 9.1% y/y in terms of GVA.

In terms of utilisation, GDP growth in the third quarter of 2021 final consumption of households (contributing 9.1pp to GDP growth), increased by 11.9% y/y, accounting for 79.1% of GDP.