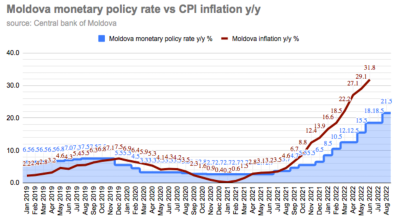 Consumer price inflation exceeded 30% y/y and the industrial price inflation was not far from this in June. The inflation outlook is gloomy as the high gas price (still rising) has not entirely passed through into consumer goods’ prices.

The decision, the BNM explained, aims at tempering the rapid growth of consumer prices, mitigating the secondary effects of supply shocks, stimulating financial intermediation in the national currency and saving against consumption, balancing the foreign trade, as well as anchoring inflationary expectations.

However, such high monetary policy and inflation rates are likely to have more negative side effects associated with them, compared to the standard monetary policy operating in the range of more common interest rates.

Moldovan banks can now place their excess resources overnight with the BNM at the interest rate of 18.5%. But the deposit interest rates paid by the banks were, as of June (latest data available) lower than 11% for the most common six to 12 month maturity. The deposit facility offered by BNM at that time, in June, was 15.5% — resulting into an interesting arbitrage spread.

At first sight, the deposit facility seems a great opportunity for Moldovan banks (and a high cost incurred by the BNM). But the huge required reserve ratios tilt the balance in favour of the BNM and reduce the benefits of the banks with excess liquidity (while deepening the troubles of the cash-strapped banks).

As an effect, the hawkish policy has a significant role in discriminating in the short term in favour of the banks with abundant liquid resources against the banks that placed all their resources in long-term loans, tending to aggravate the potential weaknesses of smaller-sized banks.

The price of some food goods decreased on a seasonal trend in June, but on an annual basis average food prices rose by 34.1%. The rising cost of energy remains, however, the main driver for Moldova’s surging inflation; the price of natural gas quadrupled as of June compared to one year earlier.

Moldovan president calls for all Russian troops to leave the country

Putin signs off annexation of four Ukrainian regions
1 day ago
Kremlin preparing for a protracted conflict by putting Russian economy onto a war footing
2 days ago
Hungary’s forint slides to new low after central bank ends tightening cycle
2 days ago
Slovak ministers criticise Czech border controls
2 days ago
Might Trussonomics be a branch of Erdoganomics?
2 days ago