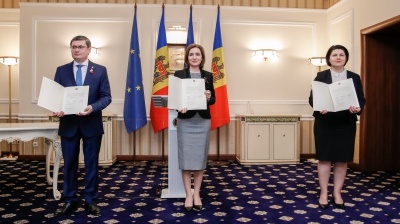 Moldovan President Maia Sandu announced on March 3 that her country officially sealed a formal request for European Union membership and that the document will shortly be submitted to Emmanuel Macron, president of France, which currently holds the rotating presidency of the EU.

“We are ready to do everything to achieve this fundamental national goal," said Sandu while signing the document.

“It’s a long way ahead of us,” she admitted during a debate hosted by Jurnal TV.

Moldova will pull out from the Russia-dominated Community of Independent States (CIS) only when the country is sufficiently advanced along the European integration path, she said during the same discussion.

As regards the key issue seen as an obstacle for the country’s EU membership, Sandu said that she sees expects a peaceful settlement of the dispute with the separatist authorities in Transnistria.

"We have not carried specific talks [with the EU] on this. We discussed the Transnistrian conflict and the need to resolve this conflict, as well as the fact that we see this solution as peaceful. We see a solution that would result in a functional state, but we did not discuss concrete topics at this stage" said the president.

With a substantial Russian minority, Moldova has long been torn between east and west. However, in the last two years the population voted in two successive landslides to elect Sandu and her pro-EU Party of Action and Solidarity (PAS).

Support for EU membership among the Moldovan population is robust but not overwhelming. However, public opinion in Moldova is expected to have been significantly impacted by the invasion of Ukraine, in the sense of strengthening the population’s EU orientation.

Out of those consulted in a poll conducted shortly before the Russian invasion of Ukraine, 52% opted for EU membership versus 26% expressing negative opinions. Notably, 48% of those polled supported the alternative option of their country joining the Russia-led Eurasian Economic Union with 27% opposing such an option. Such polls typically do not cover the population of the pro-Russian separatist region of Transnistria, but they also fail to cover the massive diaspora located mainly in Europe.