Missiles or sabotage: What caused the explosion at the Russian airbase in Crimea? 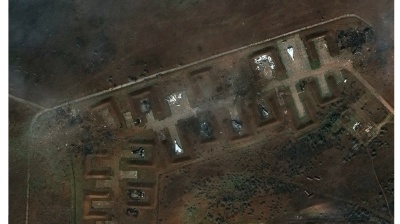 It is not clear what happened at the Saki airbase in Crimea, but the destruction from huge explosions was extensive / bne IntelliNews
By Dominic Culverwell in Berlin August 12, 2022

Satellite images from the Saky air base in Crimea show that at least nine planes were destroyed by a mysterious explosion on August 9. The Ukrainian Military of Defence pointed out that the number is likely to be higher, but confirming the actual figure will take time.

Five people were reported injured in what Moscow initially claimed was an accidental explosion of an ammunition dump at the base that provides air support for Russia’s Black Sea Fleet. However, many experts agree that the explosion was likely a Ukrainian strike, although this has not been officially confirmed by Kyiv or Moscow. 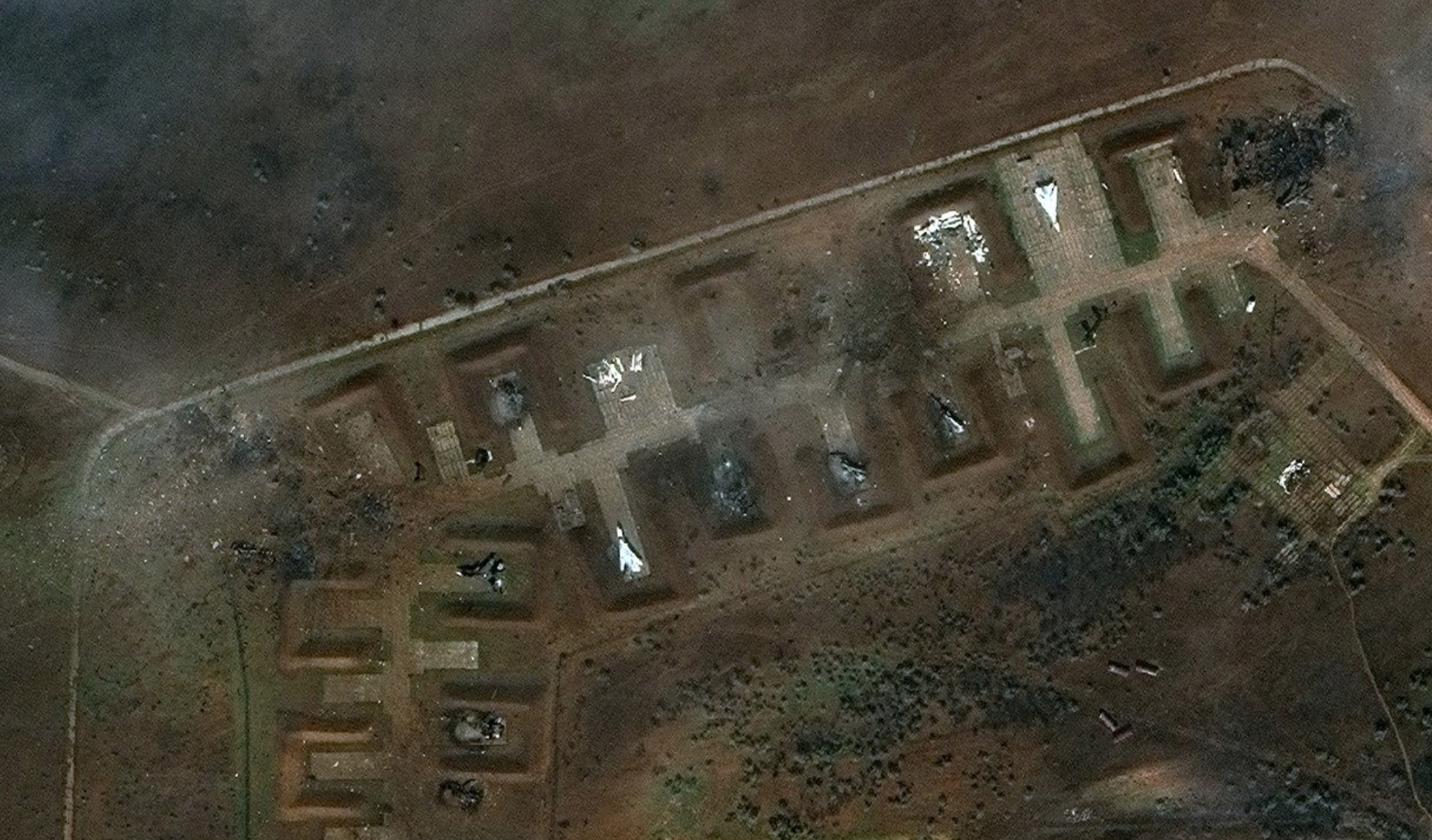 Russia’s air defence missile systems, reportedly S-400s, failed to protect the base, sparking a debate about what caused the blast. Experts have pointed to US-made ATACMS as a likely possibility. Viktor Kevliuk, an expert at the Centre for Defence Strategies, suggested that Ukraine could have used United States AGM-88 HARM anti-radar missiles against the air defence systems followed by 2 ATACMS missiles launched from High Mobility Artillery Rocket Systems (HIMARS), Euromaidan Press reported.

Several open source intelligence accounts on Twitter cited the large craters as well as the accuracy and 200km distance from Ukrainian-held territory as evidence for an ATACMS attack. Although the US has not yet officially provided Ukraine with ATACMS, they could have been supplied without an announcement. 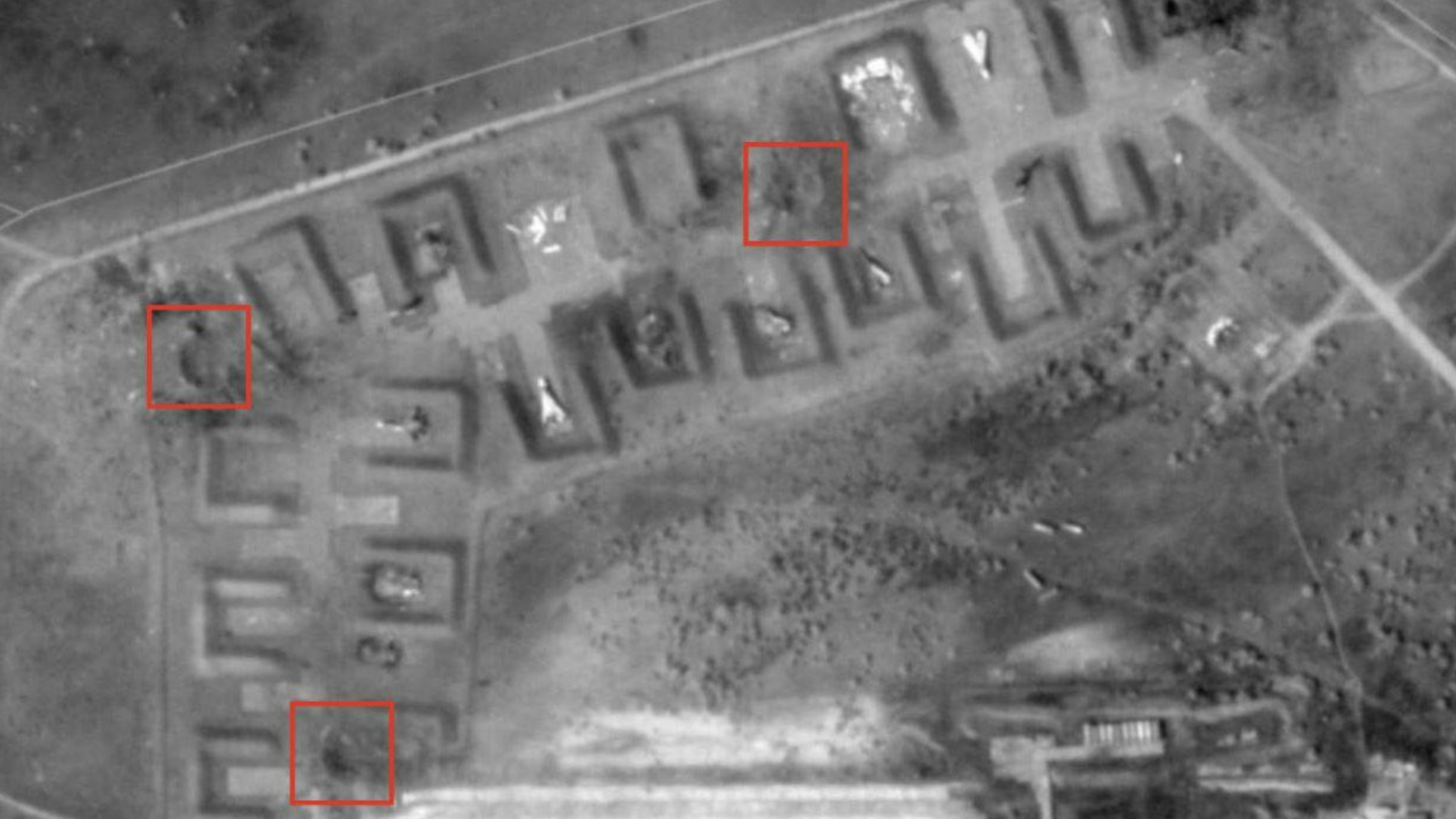 Kevliuk also believes that Ukraine could have used the Neptune anti-ship cruise missiles, which sank the Moskva ship back in April. Although the missiles were designed to hit targets at sea, Kevliuk suggests that the Neptune missiles could have used GPS coordinates to hit land targets, NV Ukraine reported.

Strangely though, no missiles can be seen in footage from the explosion. As such, a drone strike is another possibility, much like the Ukrainian drone attack on a Russian oil refinery in Rostov Oblast, 160km behind frontlines, in June. However, experts interviewed by NV Ukraine don’t consider this a realistic option and note that the ATACMS is a ballistic missile that flies into an object almost vertically at high speed, meaning it is difficult to see on a normal video.

Others have suggested partisans sabotaged the airbase. Julian Röpcke, a journalist from Bild, pointed out that three of the craters are “precisely under three of the ammunition storages for the jet”. As opposed to an exceptionally accurate missile strike, Röpcke suggests that this could signal the storage buildings were rigged with explosives and detonated remotely by Ukrainian special forces.

Moreover, an unnamed senior Ukrainian official spoke with The New York Times claiming that “partisan resistance forces” were involved in the attack but did not confirm whether they carried out the attack or assisted the Ukrainian MoD in targeting the base, Euromaidan Press reported.

Regardless, the impact of the explosion on Russia is immense and signals a shift in the war. Moscow did not expect Ukraine to be able to conduct a strike 200km behind the front line and the incident has shaken many Russians who were holidaying in the occupied region. Thousands of holidaymakers have fled back home causing traffic jams on the Kerch Bridge, which connects the peninsula to Russia.

For Russian morale and propaganda, this is devastating. Russian President Vladimir Putin annexed the peninsula in 2014, causing a surge in his popularity ratings with Crimea symbolising his success. The Kerch Bridge was completed in December 2017 representing the “reunification” of Crimea and Russia and granted Russian tourists easy access to the peninsula. However, if long-range missiles did strike Saky airbase, this puts the bridge in a vulnerable place and its destruction would burden Putin with more humiliation.

Analyst and former Army Major General Mick Ryan explained on Twitter that the supposed attack damages Russia in ways far beyond its impaired aircraft. The base provided air support for Russia’s Black Sea Fleet, which is now much more vulnerable to Ukrainian attacks along with the rest of the peninsula.

“The Ukrainians clearly can now hold large parts of Crimea at risk. And not just airbases. The Black Sea Fleet, its fuel, munitions, repair yards and infrastructure are now vulnerable. This places the Russians in a real quandary”, Ryan tweeted.

As a result, Russia may increase its air defence or reevaluate what military systems they base in the region. However, the failure of the S-400 systems and other air defence systems will no doubt weaken Russia’s confidence in their defence hardware, according to Ryan. In addition, it may also lead to hesitancy from foreign buyers.

Ukraine is hailing the explosion as a victory, which in turn is boosting much-needed morale aided by viral memes on social media. The official Twitter account of the Ukrainian MoD even tweeted an image of the explosion alongside the caption, “The Ministry of Defence of Ukraine would like to remind everyone that the presence of occupying troops on the territory of Ukrainian Crimea is not compatible with the high tourist season”, which has racked up nearly 51,000 likes.

Ukrainian President Volodymyr Zelenskiy didn’t directly reference the blast in his nightly address; however, he stated that the war must end with Crimea’s liberation.

“Crimea is Ukrainian and we will never give it up”, he said.

The explosion at the Saky base comes a day after the US promised to supply Ukraine with $1bn worth of weapons, including more missiles for the HIMARS and new even more powerful and longer-range mobile missile systems. Previously US President Joe Biden assigned a $40bn weapons package to Ukraine and the US has spent over $7.8bn on military aid to Ukraine before the new package was announced.

So far the US has sent 16 HIMARS to Ukraine and on July 1 promised to send two NASAMS, a surface-to-air anti-missile defence system. The US will also send 50 armoured mobile medical units to treat wounded soldiers.

Putin signs off annexation of four Ukrainian regions
Kremlin preparing for a protracted conflict by putting Russian economy onto a war footing
Russia’s industrial output decline slows to only 0.1% in August

As the current rotating president of the European Union, Prague has convened a meeting of the long moribund EU Israel Association to try to boost EU links with the Jewish state.

Last week, Belarus began its accenssion to the Shangai Cooperation Organization and the two countries both signed a deepened strategic partnership. But what does Belarus have to gain from increased integration with China?

Old alliances have broken down, with Russian vs Western orientation becoming the biggest dividing line in Bulgarian politics.

The main nationalist parties are expected to retain their leading positions in Sunday’s elections, with hopes for reforms fading away once again.