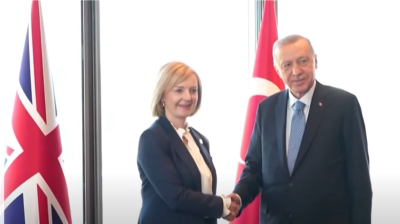 Unsettling exchange of ideas? It was only very recently that Truss and Erdogan met. / youtube, screengrab.
By bne IntelIiNews September 30, 2022

Where, the Brits, are wondering, did Trussonomics come from? A Turkish expat in London may have hit on the answer. Might it be a branch of Erdoganomics?

Assessing the critical blow that Liz Truss has dealt to the UK’s economy with a mini-budget, her first major policy move since she replaced Boris Johnson as PM on September 5, Yunus Emre Oruc, writing for Middle East Eye, set out his feelings under the headline: “Pound crash: As a Turkish immigrant in the UK, Trussonomics feels all too familiar.”

Oruc, who recalled how after the Turkish lira plunged in value during Turkey’s August 2018 currency crisis “I decided I could no longer take it in the country”, says”: “I always thought the British and Turkish governments shared many things in common, from an increasingly chauvinistic approach to the European Union, to a deepening love for populism, to a push to polarise people further for electoral gains. But that long list of anticipated commonalities did not include self-inflicted hits on their own economies.

“Today, three-and-a-half years after moving to the UK, I can see many similarities between their financial policies, which are taking a severe toll on people’s daily lives.”

“Trussonomics feels very similar to Erdoganomics,” concludes Oruc, proposing “that both are purely driven by ideological, almost dogmatic, stances on the very basics of how the economy works. Their pursuit of growth at all costs aims to make the pie bigger, but not everyone’s share grows the same—if it grows at all. This comes at a heavy price, with very little fiscal responsibility displayed by both governments for years. Worst of all, neither aims to redistribute wealth; if anything, both approaches work towards increasing inequality between the rich and poor.”

Oddly enough, September 29 featured a speech from Turkish President Recep Tayyip Erdogan in which he took a pop at the British pound, saying it had “exploded”.

The day saw the lira trade at its latest all-time weak rate, at 18.55/$. With Turkish inflation officially running at more than 80% (in reality it’s even far higher than that say many Turkish economists) and the lira in another death spiral (it’s down 80% in the past five years), it might be thought that Erdogan would by now command his officials to bring in a big rate hike. Far from it. Under Erdoganomics, higher interest rates translate into more inflation. Thus, Erdogan looked his audience in the eye and doubled down on his unorthodox monetary policy, announcing that with the benchmark rate at 12%, he would be pursuing a single-digit figure in the not-too-distant future.

“Oh the irony, Erdogan giving Truss advice on the economy,” wrote Timothy Ash, an emerging markets strategist at BlueBay Asset Management, in a note to investors. “Turkey has 80% inflation and I guess the worst performing currency over the past decade. Lol. How low the U.K. has sunk.”