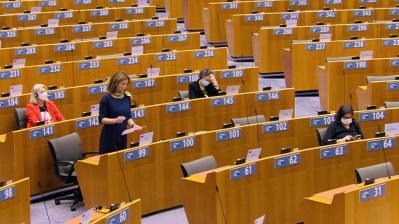 MEP Tanja Fajon addresses the European Parliament in the debate on Hungarian interference in the media.
By Valentina Dimitrievska in Skopje November 26, 2020

MEPs held a debate on Hungarian media financing in North Macedonia and Slovenia and asked the European Commission to take concrete measures against this practice, MEP Tanja Fajon announced on November 25.

The debate in the European Parliament on Hungarian interference in the media was held at the initiative of Fajon and her group of Socialists and Democrats.

Vice President of the European Commission for Values and Transparency Vera Jourova attended the debate to answer MEPs' questions.

“If it is true that Hungarian companies close to Prime Minister Viktor Orban's inner circle in at least one operation - we are talking about at least €4mn - financed media purchases in North Macedonia in the run-up to the elections to help former Macedonian PM Nikola Gruevski, this can be a gross interference in the democratic process,” Fajon said on her official web page.

Gruevski, from the conservative VMRO-DPMNE party, was granted asylum in Budapest after he fled North Macedonia in 2018 to avoid serving a prison sentence.

Dutch MEP Kati Piri was cited by news agency MIA that Orban has one goal and that is to undermine Europe for his personal benefit.

"He tried to overthrow the government of PM Zoran Zaev, granted asylum to Gruevski, he is trying to prevent North Macedonia's integration into the EU," she said.

MEP Irena Joveva underlined that Slovenian government, without public support, seeks to transform Slovenia into an illiberal society, endangers the media, and forms parallel structures funded by Orban to undermine the fundamental values of the EU.

According to Fajon “one and a half million [of] Hungarian money is supposed to come to the accounts of two Slovenian media houses close to the ruling SDS” of Jansa.

Both Jansa and Gruevski are close allies of Orban

Jourova noted the European Commission would continue to support independent and professional journalism across Europe.

“EU supports foreign-funded media when they act only as businesses, but when they have a political agenda then something is wrong,” Jourova was quoted.

North Macedonia plans to cut personal income tax in IT sector to zero in 2023
Western Balkans citizens legally resident in EU equal to 14% of region’s population
BALKAN BLOG: US approach to switch from quick-fix dealmaking to experience and cooperation

After securing a majority in parliament in December, Romania’s ruling centre-right parties are finally able to undo the damage done by previous governments’ efforts to stop the fight against corruption.