As bne has previously reported, the  Norwegian financial company Ferncliff revealed that its subsidiary Standard Drilling directly sold an offshore drilling platform to Ukraine's national gas company Naftogaz in 2011 for $220m, contradicting claims by the Ukrainian state-owned oil and gas company that it acquired the rig for $400m from Latvia's Riga Shipyard via an open tender.

This wasn't the first time that Naftogaz was involved in a deal involving such a huge discrepancy in the price it paid and the price quoted by the makers of the drilling platform. A previous, nearly identical acquisition of a similar drilling platform by Naftogaz in 2011 had raised widespread accusations of corruption and sparked investigations in Ukraine. But whereas the first deal in early 2011 involved shell companies and a controversial Latvian-owned bank Trasta Komercbanka, the second looked superficially cleaner: using an intermediary supplier of the drilling platform that was a bone fide ship-builder, Riga Shipyard, albeit one with no connection to drilling rigs; and instead of using the Latvian-owned bank, bne can reveal the second deal was executed via the Latvian subsidiary of CEE banking giant UniCredit.

To complete the deal, bne has obtained documents that show Riga Shipyard used a newly registered UK subsidiary Northsale Logistics Ltd with an account at UniCredit Latvia, and set up another account for itself also at UniCredit Latvia – parallel to the shipyard's main account at the Latvian branch of Finland's Nordea Bank. The shipyard at the time disclosed an "agency and freightage" agreement with Northsale for implementing the rig deal. Northsale enjoyed small company status in the UK, exempting it from independent audit. 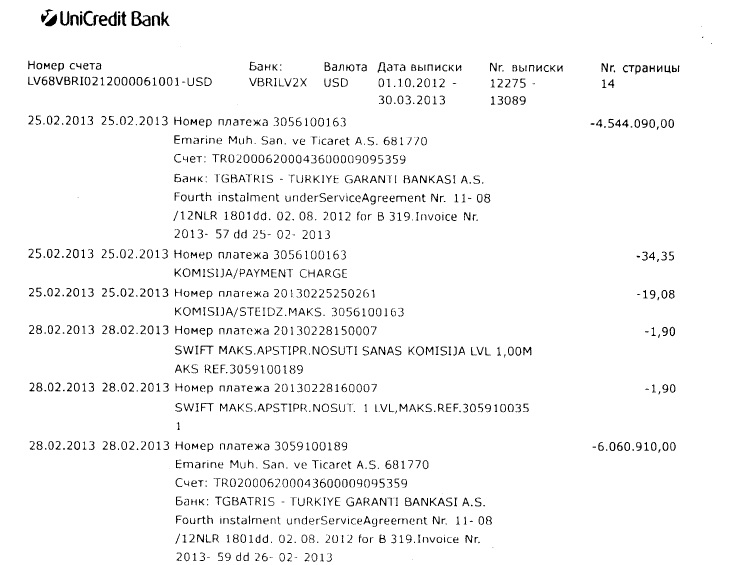 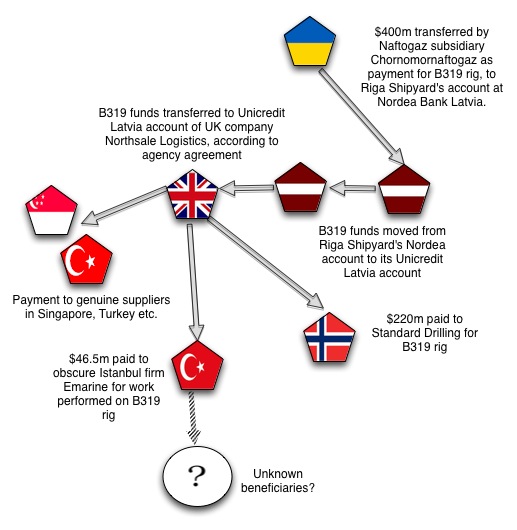 Riga Shipyard disputes any wrongdoing and says that details of the deal including payments are confidential. In a statement issued March 25, the Latvian company complained of a media campaign organised against it by Latvian creditors trying to have the company declared bankrupt. "Unfair information and statements are being distributed in the community, which fundamentally slur Riga Shipyard," reads the statement.

Between October 2012 and March 2013, Northsale transferred a total of $46.5m from its UniCredit Latvia account to the Turkish account of the tiny Istanbul ship repair company Emarine, operated by a Turkish citizen called Murat Bayrak.

The money was ostensibly transferred for work performed on the B319 rig. But there are good reasons to doubt this because bne enquiries revealed that Emarine and Bayrak performed no significant work connected to the rig. "Emarine was not part of the B319 project," Salih Fidan, B319 installation site manager in Turkey, tells bne.

In an interview, Bayrak declined to say what his role in the operation had been, citing confidentiality clauses in the contract. Emarine has share capital of only around €3,000, a glaring mismatch between the size of the funds transferred and the size of the company. Moreover, bne sources in the industry estimate the total cost of the work performed – reassembly of the rig legs – at not more than $5m.

Riga Shipyard sold Northsale in the last days of 2012, which the shipyard claimed absolved it from consolidating the subsidiary on its accounts for 2012. Most of the payments to Northsale that were wired on to Emarine took place in 2013 after sale of the subsidiary. Between January 2013 and February 2013, Riga Shipyard transferred $39.5m in multiple instalments to Northsale, which forwarded the same amount to Emarine.

Latvian police in late 2012 announced a money-laundering investigation into the UK shell company Highway Investment Processing, which was involved in Naftogaz's equally controversial rig acquisition in early 2011. Highway Investment Processing had implemented the deal via a bank account at a controversial local Latvian-Ukrainian bank called Trasta Komercbanka. Trasta Komercbanka has denied any wrongdoing.

In May 2013, UniCredit declared it was pulling out of Latvia and winding up its bank there. As late as January 2013, the bank had said it planned to centralise its Baltic operations in Latvia. "In the Baltics we had only a tiny presence and decided to gradually downsize and close activities," UniCredit in Vienna tells bne. The decision concerning the Baltics was taken in 2013 and had “nothing at all” to with money-laundering concerns regarding the Riga Shipyard or any other transactions, the bank explains.

The new administration in Ukraine has moved quickly to probe the corrupt dealings during the four years of ousted president Viktor Yanukovych. Naftogaz, long a nest of murky deals, has been at the centre of the investigations, with Ukrainian police arresting the former head Evhen Bakulin on March 21. Acting Interior Minister Arsen Avakov alleged that losses to the company under Bakulin's watch “on just three counts” exceed $4bn.

There was surprise at the hitherto respected Timonkhin's choice of new employer, who on March 20 was placed on Ukraine's wanted list by the Prosecutor General on charges of embezzlement of around $120m of Naftogaz funds, offences described in detail in media since 2012. Timonkhin joined the supervisory board of Kurchenko's newly acquired Brokbiznesbank and in this capacity, as bne has reported, he apparently signed off on an over $70m loan to a sham firm linked to Kurchenko, which had also received millions of dollars in procurement orders from Naftogaz.

Kurchenko has since fled Ukraine. Ukraine's security service SBU detained Brokbiznesbank supervisory board chairman, Denis Bugai, on March 21 on charges of fraud and forming a criminal organisation. Interior Minister Avakov has accused Kurchenko and his gang of defrauding Naftogaz of around $200m.

Timonkhin himself is currently in France, but denies he is on the run. In an interview published in Ukrainskaya Pravda on March 24, the former UniCredit banker denied belonging to what the SBU calls "Serhiy Kurchenko's criminal group." Timonkhin also criticised the arrest of Bugai, the Brokbiznesbank chairman, saying that Bugai was "clean."

UniCredit declined to comment on whether Timonkhin had influenced UniCredit's decision to take on the Naftogaz-Riga Shipyard business. Timonkhin could not be reached for comment by bne.