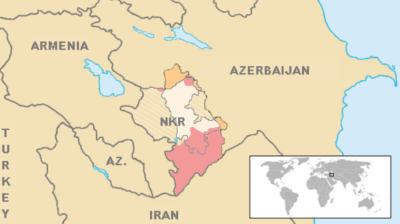 Approximate frontlines at the time of the late 2020 ceasefire, with Azerbaijan's territorial gains during the war in red, the Lachin corridor under Russian peacekeepers in blue, and areas ceded by Armenia to Azerbaijan hashed. / VartanM, Kmusser, Solavirum, cc-by-sa 1.0.
By Cavid Aga in Baku September 12, 2022

Major exchanges of fire between Armenia and Azerbaijan broke out late on the evening of September 12 in a border region.

Azerbaijan accused Armenia of carrying out a large-scale provocation in the Dashkesan, Kalbajar and Lachin directions of the Azerbaijani-Armenian state border. Officials said there were casualties on the Azerbaijani side, but did not say how many.

The press secretary of Armenia’s Ministry of Defence, Aram Torosyan, wrote on his Facebook page that units of the Azerbaijani Armed Forces began intensively shelling Armenian positions with large-calibre artillery guns in the direction of Goris, Sotk and Jermuk. Azerbaijani military drones were also in action, he said.

Since the end of the Second Nagorno-Karabakh War, or “44-Day War”, fought between Armenian and Azerbaijani forces between September and November 2020—and brought to an end by a Moscow-brokered ceasefire—there have been sporadic border clashes, provoking fears of a return to a larger confrontation. The clashes have occurred despite the deployment of Russian peacekeepers. After the exchanges began, the press office of the Armenian prime minister, Nikol Pashinyan, said Pashinyan spoke with Russian President Vladimir Putin on the phone about the situation, and called for an adequate response from the international community.

Strikes by Azerbaijan, confirmed by Azerbaijani officials, were directed at multiple border areas of Armenia, particularly at military positions in Vardenis, Goris, Kapan and Jermuk. One resident of Goris told News.am that from 23:30 local time the sound of the firing of artillery pieces was heard in the city. He said that the attack was taking place in the Black Lake area. Residents also noticed military drones in the vicinity of Kornidzor.

Anna Grigoryan, an Armenian lawmaker of the Hayastan parliamentary group, wrote on her Facebook page that the Azerbaijani armed forces also launched an attack in the direction of Kapan, with drones again in evidence.

Azerbaijani defence officials also briefed that "in order to prevent the provocation of the armed forces of Armenia and military threats against the territory and sovereignty of Azerbaijan, and to ensure the safety of our military personnel, including civilian workers involved in infrastructure works in the territories of the Kalbajar and Lachin regions, decisive response measures are being taken by the units of the Azerbaijan Army deployed in this direction".

The officials said actions of Azerbaijan’s forces had led to deaths among Armenian soldiers, but did not disclose an estimate of how many.