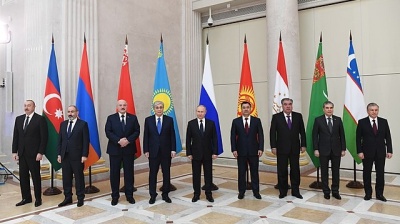 Putin and Lukashenko have been negotiating the exact nature of their Union since it was ratified in 1999, but Lukashenko claims it will expand in the next 10-15 years as a result of economic necessity. / Image: Russia Presidential Office via WikiCommons.
By Theo Normanton in Moscow February 10, 2022

Belarusian President Alexander Lukashenko considers that Central Asian countries may be forced to join the Russian and Belarusian Union State out of economic necessity in the next 10-15 years.

Responding to a question from Russian pro-Kremlin TV presenter Vladimir Solovyev on the precise nature of the Union State of Russia and Belarus, Lukashenko suggested that the economic and defence union between the two countries was likely to grow in the medium term.

He expressed the belief that an economic and defence union of “sovereign countries” with a population of 350-400mn would be necessary for the economies of former Soviet countries to function in the future.

Since a Union State deal was signed between Putin and Lukashenko in 1999, the two leaders have been trying to define the precise nature of that Union. Putin has been pushing for stronger integration between the two economies, and potentially the creation of a Rublezone. Lukashenko resists closer economic integration for the most part, but wants cheaper energy prices from Russia to prop up his centrally-run economic model.

Ever since August 2020, when Belarus was cut off from international capital markets due to the falsification of election results, Russia has had a much stronger hand at the negotiating table with Belarus, which has precious little other support on the international stage and few economic ties.

Some defence experts have speculated that the Belarusian border with Ukraine is strategically important to Russia at the moment, as it could be the starting point of an attack on Ukraine.

In this context, Lukashenko has suggested that a Union State between Russia and Belarus may soon grow into a larger economic and defence union with shared special forces, the free movement of people, and perhaps a common currency.

“Turkmenistan, Uzbekistan and Tajikistan I think will also join through force of economic necessity,” said Lukashenko. “If we’re talking about a 15-year period, I’m certain that Ukraine will also be in the Union, as long as we don’t make any mistakes,” he added.

Lukashenko also expressed the belief that Armenia would join this hypothetical future union, saying “Armenia has nowhere else to go. Do you think anyone needs them?”

Armenia’s Foreign Ministry hit back at the remarks, with spokesperson Vahan Hunanian saying “We believe that the Belarusian president's peculiar geopolitical analyses aim first and foremost to serve his domestic political agenda and have nothing to do with Armenia and its foreign policy."

Latvian Prime Minister Krisjanis Karins set to benefit from hardline stance on Ukraine war
Sanctioned Russian diamonds are reaching the US consumer, but some are getting there legally – for now
Lukashenko meets with Putin in Sochi