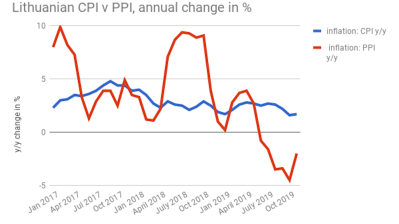 The indicator’s fall eased from a decline of 4.5% y/y in September but still marked the sixth straight month of PPI deflation. Meanwhile, headline inflation picked up slightly to 1.7% y/y in November, the country’s statistics office said earlier this month.

The annual decline in the PPI in November was driven by a 1.4% y/y price fall in the most weighted manufacturing segment, compared with a decline of 4.3% y/y in July.

That included a dip of 0.4% y/y in the price of refined petroleum products, compared with a fall of 13.2% y/y in October.

The utility segment saw factory gate prices drop 8.9% y/y in November, versus a reduction of 8.3% y/y the preceding month.

Prices in the mining and quarrying sector dropped 0.6% y/y in November, after a dip of 0.1% y/y in the tenth month.

In the water supply segment, prices fell 4.5% y/y in November, after declining 4.7% in annual terms in October.

Wages in Romania grow in Q2

Despite the coronavirus crisis, the average net wages increased by a real 0.7% y/y — the weakest performance in years but still a positive performance.

Russia's GDP fell by 8.5% in 2Q20 due the lockdown quarantine measures

Russia's GDP fell by 8.5% in 2Q20 due the lockdown quarantine measures imposed across the country reeling from the coronacrisis.

Ukraine’s consumer inflation stayed at a 2.4% y/y level in July

Romania's exports contracted by 33.5% y/y to €11.5bn in the second quarter of the year, but monthly data reveals a gradual recovery.

Racked by anti-government protests and with rising new COVID-19 cases, Bulgaria’s lacklustre retail and industrial production data indicate the hoped-for recovery is not yet in sight.

Wages in Romania grow in Q2
20 hours ago
Russia's GDP fell by 8.5% in 2Q20 due the lockdown quarantine measures
1 day ago
Ukraine’s consumer inflation stayed at a 2.4% y/y level in July
1 day ago
Romania’s exports continue recovering in June
1 day ago
ING analysts warn of L-shaped recession in Bulgaria
2 days ago