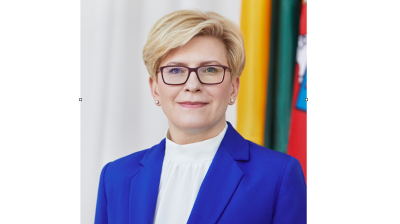 By Linas Jegelevicius in Vilnius October 26, 2020

The opposition conservative Homeland Union – Lithuanian Christian Democrats (HU-LCD), known colloquially as the Conservatives, has won the two-round parliament election in Lithuania and started talks on a centre-right ruling coalition with the Liberal Movement and the Freedom Party.

After the election results were counted in the run-off on October 25, it became clear that the HU-LCD secured 50 seats in the new parliament and will have a fragile majority with its coalition partners, based on the preliminary results.

Following their meeting at the Seimas, the Lithuanian legislature, in the early hours of October 26, the leaders of the three parties issued a joint declaration on their determination to form a government led by Ingrida Simonyte.

Simonyte, the Homeland Union – Lithuanian Christian Democrats' former presidential hopeful and now the candidate for prime minister, said late on October 25 she's taking the initiative to form a ruling coalition with the two liberal parties, adding that she would change the coronavirus (COVID-19) pandemic management model after becoming head of government.

The candidate said her first tasks would be to review the budget and change the management model, and also to listen to medical experts' opinions before making decisions.

"First of all, probably, we should change the very management method, in our opinion, and we have said that numerous times that, first of all, it should be very clear who talks to whom, about what and how decisions are made," Simonyte said.

Political scientists say the election results reflect a wish for change. But the Lithuanian Farmers and Greens Union scored fairly well in rural areas and avoided a crushing defeat. "Voters looked for certain novelties and alternatives, and we now see they have found that alternative," political scientist Rima Urbonaite said.

The Liberal Movement and the Freedom Party secured 13 and 11 seats respectively, meaning that the right-wing parties will have 74 representatives in the 141-seat Seimas.

The Farmers and Greens Unions will have 32 representatives. Its leader Ramunas Karbauskis conceded defeat on election night and congratulated the HU-LCD.

Interestingly, Ausrine Armonaite, leader of the Freedom Party, has been elected to the Lithuanian Seimas in the special constituency established for Lithuanians living abroad.

Armonaite received over 12,900 votes, or 53.15% of the total, figures from the Central Electoral Commission show.

Representing the Homeland Union – Lithuanian Christian Democrats, Dalia Asanaviciute, the former leader of the Lithuanian community in the UK, received 10,800 votes, or 44.5% of all votes cast in the constituency,

The CEC published the results from all 51 diplomatic representations that organised voting but the result of all voting by post abroad are expected in the second half of the coming week.

A special constituency for Lithuanian expatriates was established for this parliament election after a large number of Lithuanians living abroad voted during the last presidential election and referendum on dual citizenship.

Over 43,000 voters registered to vote in the Seimas election abroad. Over 35,000 Lithuanians living abroad voted in the first round and over 24,000 in the runoff, according to the CEC figures.

Meanwhile, the outgoing LFGU Prime Minister Saulius Skvernelis, who led the Lithuanian Farmers and Greens' candidate list for the parliament election, has lost his bid to secure a parliament seat in Pilaite-Karoliniskes single-member constituency in Vilnius.

Released by the Central Electoral Commission, preliminary results from 11 out of 12 districts show that Skvernelis received almost 34% of votes in the runoff. His rival Radvile Morkunaite-Mikuleniene, representing the HU-LCD, got 64% of the votes.

As leader of the LFGU candidate list, Skvernelis had already secured his parliament seat in the first round of voting in the multi-member constituency.

In 2016, Skvernelis was elected in the then Karoliniskes constituency after receiving 52.82% of the votes, winning against HU-LCD candidate Kestutis Masiulis who got 44.55%.

In the evening of October 25 Lithuanian President Gitanas Nauseda has welcomed the voter turnout in the Seimas election runoff during the coronavirus pandemic, saying that civic activity shows that special circumstances unite people.

Nauseda also says he hopes for a "more uniting political culture" from the new parliament.

"Probably the most difficult parliament election in the history of post-independence Lithuania has ended. Numerous times we have heard the concerns of whether people would come to vote amid the spreading coronavirus and whether we would be able to ensure a smooth and, most importantly, safe election process," the president wrote on Facebook after polling stations closed on October 25.