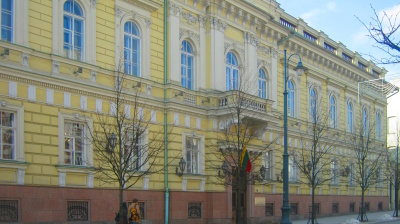 The Bank of Lithuania concluded that Finolita Unio failed to adhere to anti-money laundering and counter-terrorist financing requirements. / Wikiipedia
By bne IntelliNews June 9, 2021

The central bank of Lithuania announced on June 8 it has terminated Lithuanian fintech company Finolita Unio's e-money payment institution license for its suspected involved in the German Wirecard fraud scandal.

As reported by bne IntelliNews, German prosecutors are looking at the role of Lithuanian payment company UAB Finolita Unio in channelling ca €100mn from Wirecard, a German payment provider, weeks before it collapsed.

Having completed its investigation that was started last autumn, the Bank of Lithuania has concluded that Finolita Unio failed to adhere to anti-money laundering and counter-terrorist financing requirements.

"The investigation conducted by the Bank of Lithuania revealed that UAB Finolita Unio treated anti-money laundering and counter-terrorist financing requirements very formally and irresponsibly and made many severe infringements in this field," the central bank said in a statement.

The company failed to assess money laundering and terrorist financing risks of its customers, acted with negligence when establishing and checking identity of its customers and beneficial owners, failed to identify the nature of activities of legal entities, improperly monitored business relationships and operations of customers and failed to comply with the requirements related to the implementation of international financial sanctions and enforcement measures, the bank said.

Its decision to revoke the license means that the company will no longer be able to provide any financial services.

The Financial Times reported in May that German prosecutors suspected that Finolita Unio "was used to steal more than €100mn from Wirecard weeks before it collapsed".

According to the Financial Times, Singapore-based payments company Senjo Group, Finolita Unio's shareholder, and its sister companies had borrowed close to €350mn from Wirecard by the first quarter of 2020, including a €100mn loan to a subsidiary named Ocap in late March.

Finolita later stated that the company had separated its Singaporean shareholders from its activities. Even though the Singapore-based company remained a shareholder of Finolita, its non-proprietary rights had been handed over to Valnetas, the bankruptcy administrator of Lithuania's Snoras and Ukio Bankas. Finolita plans to appeal the Lithuanian central bank's decision

Wirecard's former CEO, COO, two board members, and other executives have been arrested or otherwise implicated in criminal proceedings. In June 2020 the company announced that €1.9bn in cash was missing. Munich prosecutors suspect that hundreds of millions of euros were siphoned off in the run-up to the insolvency.