Latvian industrial production returns to growth in May 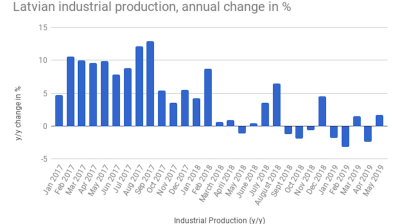 The reading marks a return to growth for the Baltic state’s industrial sector after output fell in April in what was a third fall in the previous five months. Erratic output figures early in the year appear to be a harbinger of the likely easing of GDP growth in the Baltic state in 2019.

The growth of industrial output in May came on the back of production in the manufacturing segment expanding 1.7% y/y in May, a slowdown versus growth of 3.8% y/y the preceding month.

Production in mining and quarrying fell 3.3% y/y in May after jumping 23% on the year in April. In the electricity and gas supply segment, output grew 2.8% y/y after a fall of 22.6% y/y previously.

Within the manufacturing sector, 10 of 16 segments recorded annual production growth in May. Expansion was the fastest in production of electrical equipment, at 32.9% y/y. Output fell the most in the manufacture of chemicals and chemical products, at 10.2% y/y.

In seasonally adjusted monthly terms, industrial production expanded 2.1% in May after falling 2% m/m the preceding month.

Output in the manufacturing segment fell 0.1% m/m in May after falling at the same monthly rate in the fourth month. Mining and quarrying saw production fall 8.3% m/m, which followed an expansion of 3.5% m/m in April.

Most economies are failing to provide the conditions in which their citizens can thrive, said the World Economic Forum on releasing its new social mobility index.

Rise was driven by electronics and automotive sectors where foreign investors have developed production facilities, while light industry keeps losing ground due to the lack of workforce.

The headline figure also sees the PPI inflation rate below zero for the fifth consecutive month after an uninterrupted growth period of nearly three years.

McDonald’s opened its first restaurant in Hungary in April 1988 and since then it has become a dominant player in the fast food market.