Landlocked Tajikistan wants trade shipment access to Iran’s only oceanic port, the free port of Chabahar on the Sea of Oman. 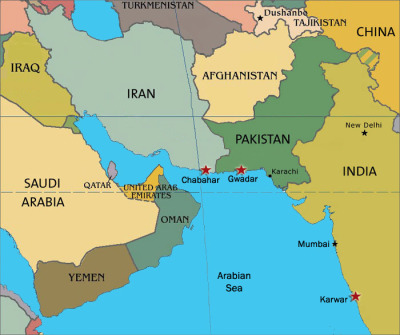 The Persian-speaking Tajiks also have no navigable inland waterways. Agreed access to Chabahar—subject to ongoing expansion and development in an investment agreement with India that benefits from a sanctions-free approach from the US, which values the role the port could play in building up war-torn Afghanistan’s economy—would potentially be a real shot in the arm for Tajikistan, especially as the port runs a free trade zone and offers unhindered shipping lanes to the Indian Ocean.

Iranian President Hassan Rouhani in June paid a visit to Tajikistan where he met counterpart Emomali Rahmon. Subsequently, in early July, it was announced that Tajikistan and Iran had come to an  agreement on financing and completing the Istiklol Tunnel near Dushanbe. The tunnel is part of an Ahmadinejad-era vision for a highway that would stretch from Chabahar and run to Afghanistan and Dushanbe before connecting to Xinjiang in China.

The route was originally jointly financed by the Iranian and Tajik governments in 2014, but the funds dried up in 2015 with the tunnel only half-built.

Iran has invested more than $60mn in the construction of the tunnel to date and has carried out much of the engineering work.

As with other CIS countries, Tehran appears to be attempting to mend ties with Tajikistan, a somewhat estranged ‘Persian cousin’.

Despite warm relations during the two Iranian administrations of Mahmoud Ahmadinejad that ran from 2005 to 2013—marked by billion-dollar investments made by the now-jailed Babak Zanjani in transport, banking and infrastructure—recent years have seen a strained relationship between Asia’s only two Persian-speaking nations.

Relations soured when Iran hosted an Islamic conference to which it invited representatives from Tajikistan who included the exiled leader of the Islamic Renaissance Party of Tajikistan, Muhiddin Kabiri.

The past couple of years has seen Dushanbe hosting visits made by representatives from Iran’s arch-rival in the Gulf, Saudi Arabia. The Saudis, along with other Arab countries such as the United Arab Emirates (UAE) have been looking to counter Iranian influence in Tajikistan by granting aid and pushing investment projects that range over areas including tourism and leisure.

“Polish Stonewall” as protests, clashes with police in Warsaw after arrest of LGBT activist

Hundreds of LGBT rights activists and their supporters clashed with police in Warsaw following the prosecution’s decision to arrest a transsexual woman for allegedly vandalising a van carrying anti-LGBT messages and assaulting its driver.

Standoff at the barricades in Bulgaria

After a month of mass anti-government protests, police tried to remove protest camps from central Sofia but met with determined resistance from demonstrators.

CNB governor Jiri Rusnok says a change in the CNB's interest rates is unlikely before the end of the year.