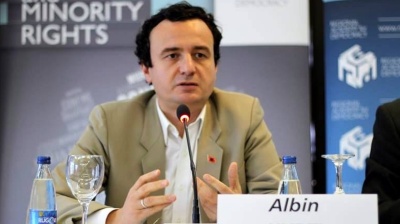 By Valentina Dimitrievska in Skopje January 24, 2021

Kosovo’s Central Election Commission (CEC) has refused to certify the election lists of the main opposition party, Vetevendosje, as well as the Alliance for the Future of Kosovo (AAK) and NISMA, which are part of the ruling coalition government, ahead of the February 14 snap general election.

The CEC declined to certify the parties’ lists as they broke rules which state a person who has been found guilty of a criminal offence in the last three years cannot run for parliament.

Vetevendosje's election list includes its leader Albin Kurti, the party’s candidate for prime minister, who was found guilty of carrying out tear gas attacks in the parliament in 2015-2016.

The CEC decided not to certify the lists after the parties refused to remove candidates who, according to the judicial council, are banned from entering the election race after being found guilty of criminal charges in the last three years, broadcaster RTK reported. The parties were given a 24-hour deadline to appeal the decision or to change the names on the lists.

In the meantime, the CEC decided to approve the lists of the opposition Democratic Party of Kosovo (PDK), the ruling Democratic League of Kosovo (LDK) and Srpska Lista (Serb List) after they replaced the names of candidates facing legal problems.

The issue of MPs with previous convictions is a particularly important one ahead of this election as the vote was called after the Constitutional Court ruled that the parliament vote to approve the government of PM Avdullah Hoti in June 2020 was invalid, as the deciding vote was cast by an MP who was convicted of corruption and jailed.

If the dispute is not resolved it could see Vetevendosje barred from fielding candidates despite recent polls showing it has a substantial lead among voters.

A recent poll commissioned by TV station T7 and Gazeta Express showed that Vetevendosje enjoys the biggest support among voters, at 50%, followed by the PDK with the support of 16.94% of respondents and the ruling LDK on 15.97%, Gazeta Express reported. Just 6.98% of those surveyed would vote for the AAK while 2.95% support NISMA.

The poll was carried out in 11 cities of Kosovo where 62% of the country’s population reside while the processing of the poll results in rural areas is ongoing.

Vetevendosje won the general election in October 2019 and formed a government led by Kurti with the LDK in early February 2020. However the Kurti government was ousted on March 25 when it lost a no-confidence vote triggered by the LDK after a falling out between the two parties. They clashed on key issues — the 100% tariffs on imports from Serbia and Bosnia & Herzegovina (that have since been lifted) and the handling of the coronavirus epidemic. The LDK was pushing for an immediate lifting of sanctions amid fears that Kosovo’s relationship with the US would be damaged should they remain in place.

The trigger was Kurti’s sacking of Agim Veliu, a member of the LDK, as interior minister after Veliu supported calls from then president Hashim Thaci for a state of emergency to be declared.

Although the government it led was short lived, the 2019 election was remarkable for Vetevendosje’s strong showing as voters turned away from the parties that had previously ruled the country, amid growing frustration over poverty and corruption.

The election victory came despite Kurti and three other opposition MPs receiving suspended jail terms of between 15 and 18 months for tear gas attacks in the parliament. The opposition staged the series of tear gas attacks in 2015 and 2016 in protest against a border deal with Montenegro and an EU-mediated agreement with Serbia.

VIENNEAST COMPASS: All in? Kosovo, Albania and the prospects of unification