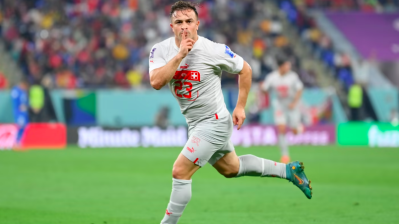 Kosovan football fans flooded social media with accusations of FIFA double standards after the World Cup match between Serbia and Switzerland on December 2, claiming Serbian fans’ “calls for the murder and genocide” of Albanians were tolerated, while an Albanian fan was removed from the stadium for making the national eagle symbol.

Tempers flared on the pitch several times as Serbian players clashed with Switzerland captain Granit Xhaka and his teammate Xherdan Shaqiri. Serbian substitutes burst onto the pitch when Aleksandar Mitrovic’s penalty appeal was denied in the second half.

Off the pitch, a public address in the 77th minute called for Serbian fans to stop chants they were making within the stadium. Later reports claimed the chants from fans included calls for genocide.

The confrontation between Serbia and Switzerland was expected to be fractious. The teams previously played each other in the group stage of the 2018 World Cup, when Shaqiri and Xhaka were fined for celebrating Switzerland’s victory with eagle-hand gestures.

After the December 2 match in Qatar, the Guardian reported a source within the stadium as saying that Serbian fans were chanting “Kill, kill, kill the Albanians” and “Kosovo is the heart of Serbia”.

The newspaper also reported that some Serbian supporters were wearing clothes with fascist slogans and that the racist songs and chants against ethnic Albanians took place throughout the match, not only in the final minutes.

The reports from the match sparked an outpouring of anger from Kosovan fans.

“The eagle is a symbol of resistance against the long and brutal Serbian oppression of Kosovo,” wrote Paskalla on Twitter.

"The #FIFA narrative: Serbian chauvinistic messages and gestures and calls for murder and genocide are tolerated, while Albanian symbols of resistance and national flags are banned.”

Ruben Avxhiu, editor-in-chief of New York-based Albanian-American newspaper Illyria, posted a link to the Guardian’s article on Twitter, adding the comment: Meanwhile @fifa is busy kicking out of the stadium Albanian female fans for doing the benevolent and amusing eagle-hand gesture.”

Another fan referred to an incident where Xhaka appeared to grab at his crotch to taunt Serbia fans.

“Granit Xhaka, probably: “I promise I won’t do the Albanian eagle anymore, FIFA”

Switzerland defeated Serbia 3:2 in the match, the final match for the two teams in the group stage of the tournament. Serbia will thus go home, while Switzerland goes on to play Portugal.

Shaqiri scored the first goal of the match, but Serbia’s Aleksandar Mitrovic and Dusan Vlahovic then put the Serbian team briefly ahead. Breel Embolo then scored a second goal for Switzerland just before half-time, and Remo Freuler won the match for Switzerland in the 48th minute.

The reports of hate speech and calls for genocide on December 2 follow a controversial incident involving the Serbian team reported earlier in the tournament.

FIFA opened disciplinary proceedings against Serbia over a political banner hung in the national football team’s locker ahead of Serbia’s World Cup match with Brazil. It showed a map of Serbia that included Kosovo, a former province that declared independence in 2008, and bore the caption “No Surrender”.

Photos showed the banner hanging over the lockers of footballers Milos Veljkovic and Andrija Zivkovic ahead of the match with Brazil on November 24, which Serbia lost 2:0.

The Football Federation of Kosovo (FFK), the national team of which did not qualify for the World Cup, made a formal complaint to FIFA.

Recent weeks have seen a serious escalation in tensions between Serbia and Kosovo, which EU High Commissioner Josep Borrell warned earlier in November could lead to another conflict.

However, the chief negotiators for Belgrade and Pristina reached an agreement on the bitter dispute over car number plates late on November 23, easing the crisis in northern Kosovo, which is mainly populated by Serbs.

Previously, Kosovo planned to start fining Serbs in the country who continued driving cars with the old neutral status KS plates, rather than switching to RKS plates. This sparked a mass walkout of state institutions by Kosovo Serbs as well as several protests in the volatile north of the country.

Kosovo unilaterally declared independence from Serbia in 2008, nine years after the 1998-99 war of independence in which around 13,000 people died. The war ended with the Nato bombing of Serbia in 1999.

While Kosovo is not universally recognised as independent, it was admitted into both FIFA and UEFA in 2016.