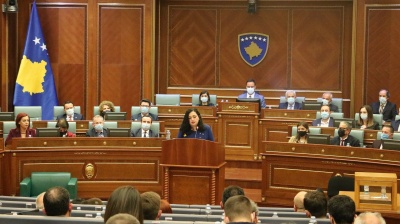 By Valentina Dimitrievska in Skopje April 4, 2021

Kosovo’s parliament elected Vjosa Osmani as president on April 4, ending fears of a political crisis in the country.

Osmani’s election was made possible by the change of leadership in her former party the Democratic League of Kosovo (LDK), as the new party leader Lumir Abdixhiku said LDK MPs would attend the session on her election, ensuring there was the required quorum.

After the formation of the new Kosovan government on March 22, opposition parties initially failed to support Kurti’s proposal for Osmani, ex-parliament speaker and ex-acting president, to be appointed head of state with a full five-year mandate.

However, on March 30, Abdixhiku announced that his party will attend the session when MPs vote for the president, though he said he was not sure if all LDK members would support Osmani’s candidacy. According to the constitution, the president of Kosovo is elected by a two thirds majority in the 120-seat assembly, which requires support from opposition parties, at least for a quorum.

Osmani was a senior member of the LDK until 2020, but she was dismissed from all party structures due to her disagreements with then party leader, Isa Mustafa.

A total of 82 MPs attended the parliament session at which Osmani was elected with 71 votes in favour while 11 votes were invalid, broadcaster RTK reported.

Two opposition parties, Democratic Party of Kosovo (PDK) and NISMA as well as the Serb List, a party of ethnic Serbs in Kosovo did not participate in the vote.

Immediately after the vote, Osmani was sworn in as president.

Kurti thanked all MPs who vote for her election. “We have now completed the establishment of our institutions and enter a new stage of sustainability and prosperity for the people of Kosovo,” Kurti said in a tweet.

“I wish you a lot of success in your important position and I’m looking forward to working together,” Lajcak said in a tweet.

Omani served as speaker of the parliament from February 2020 until March 22, 2021 when the new government was elected. Until that date, Osmani also served as acting president, a position she assumed in November 2020, following the resignation of Hashim Thaci, who was indicted for war crimes during the independence war with Serbia in 1998-99 and detained in The Hague-based Kosovo war time court.

38-year-old Osmani is the second female president in Kosovo following Atifete Jahjaga, who held the position in 2011-2016.