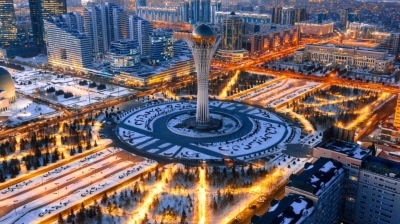 Kazakhstan’s banking sector braces for another potential round of defaults.
By Gavin Bowring in Almaty May 9, 2019

Fears of a fresh banking crisis are mounting in Kazakhstan thanks to a backdrop of rising political risk in the lead-up to the snap presidential elections in June, a debt-ridden banking sector, a recent wave of currency devaluations and chronic levels of non-performing loans (NPL) that are still plaguing the financial sector. However, analysts say a full-blown crisis is unlikely and the upshot of the current pressure will be another round of mergers and liquidations.

On paper, the macro picture has been stabilising. Since early 2017, the government has already spent close to KZT5.3 trillion ($14bn) taking over bad debts on the banks’ books that cost the country the equivalent of 9% of 2018 GDP, according to Fitch Ratings. A handful of smaller banks have also been allowed to fail, most recently Bank Astana, Exim Bank, and Qazaq Bank, which have all had their licences revoked.

Government-led bailouts – for which the government has largely not been repaid – have helped facilitate a wave of mergers between systemically important banks, including debt-plagued Kazkommertzbank Bank’s sale to Halyk Bank – combining two of the biggest banks in the country –  along with the recent purchase of Tsesna Bank (formerly the second largest lender in Kazakhstan by assets) by First Heartland Securities, a government-controlled group. Tsesna has since been rebranded as “First Heartland Jysan Bank.”

Partly in response, in mid-April Moody’s ratings agency upgraded its forecast for the Kazakh banking sector from “stable” to “positive”, citing improved capitalisation, asset quality, and better overall liquidity, expecting new lending to be of “better quality”, and overall profitability to improve over the coming 12-18 months. There appears to be a consensus that the size of the recent bailouts alone should be enough to help the sector work out remaining NPLs without triggering a systemic crisis.

Deposit-holders jittery
Yet events in recent weeks have left some deposit-holders jittery. The official banking sector NPL ratio, currently hovering close to 10%, remains heavily understated. In a recent interview, Fitch Ratings director Dmitry Vasilyev estimated that, in addition to the 9% of GDP already spent on bailouts, there are more banks with high volumes of problem loans, which account for a another 7% of GDP. Acting President Kassym-Jormat Tokayev recently announced the need to conduct a “thorough assessment” of the quality of all bank assets.

Meanwhile, there has been a flurry of new merger and share sale announcements in the last two weeks, and observers expect more to come. In late April, it was reported that First Heartland Bank, the 19th largest bank of 28 by assets, would be added to the recently merged Tsesna Bank-First Heartland Securities tie-up. Local media also confirmed that discussions are currently under way for a merger of Asia Credit Bank and Capital Bank Kazakhstan with Tengri Bank, expected to be finalized by the end of May.

The sale of shares by ALMEX Holding Group is also on the cards, controlled by the former President’s daughter and son-in-law, which has a 74.5% stake in Halyk Bank, although the exact timing and scale of the deal have not been announced.

Total deposits also decreased by 5.2% in the first two months in the year, to KZT17.6 trillion ($46.2bn), with a 14.6% decline in foreign currency deposits. The central bank (NBK) also saw its total net foreign exchange reserves decrease 13% to $27bn in the first quarter. While this was driven in large part by a one-off government purchase of Eurobonds issued by a state-owned enterprise, the sharp fall places constraints on NBK’s ability to defend the tenge against the potential for further exchange rate volatility in the months ahead, which in turn could place more pressure on banks with high levels of foreign currency debt.

Many ordinary citizens still have very little faith in the banking system, with most banks charging exorbitant real interest rates on loans (despite recent government efforts to stimulate lending through an interest rate cut in April), and the government’s selective approach to bailing out the sector – happy to support well-connected banks but allowing others to fail, and the country’s deposit insurance system providing only paltry recourse for affected depositors.

Still, a full-blown systemic crisis is unlikely. Of the country’s 28 banks, the government is unlikely to allow the top 10 banks – considered too big to fail – to go bust. Virtually every major bank is either under government control or has massive exposure to strategic state-controlled sectors such as oil and gas and government development programs. Some major banks are also supported by foreign investor shareholders.

Likely new wave of M&A and potential bankruptcies
Still the pressure banks are currently feeling is likely to spur a new wave of M&A and potential bankruptcies in the months ahead. NBK data shows that, as a whole, secondary banks in the country recorded a cumulative loss of KZT50.3bn ($132mn) for the quarter alone. In its report, Moody’s acknowledged that the “solvency of individual banks would remain weak”, while Alexandr Kamalov, chairman of the board at Sberbank, one of the country’s largest, recently said that more consolidation was inevitable.

“With perhaps the exception of just Kaspi Bank, there is no single bank in the country that can be considered independent from state support and government money. The government can decide, which banks can go bankrupt at the click of a finger”, said Arsem Beisembayev, head of analysis at FXPrimus, in a recent interview with Forbes Kazakhstan.

Many observers do not expect any major announcements or new developments to happen before the June 9 presidential election, as the government will want to ensure social stability during an already tense lead-up to the event (including widespread protests and government attempts to restrict access to the internet). Some worry, however, that once the political transition process has been completed, the aftermath could bring about a new wave of economic pain, be it through another round of currency devaluations or bankruptcies.

Divided Poland to choose more turmoil in presidential election on Sunday
2 days ago
No enthusiasm for July 15 election in North Macedonia amid relentless coronavirus epidemic
2 days ago
Mongolia to go ahead with Naadam festival, but with no tourists
5 days ago
Protests pose unprecedented threat to Turkmenistan’s authoritarian government
5 days ago
Profits of Ukraine’s banks still ahead of last year, but first signs of crisis impact visible
6 days ago