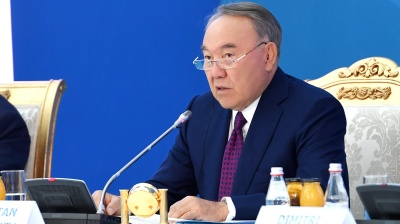 Nazarbayev: Not seen in public since near the end of last year. / Elbasy.kz
By Nizom Khodjayev in Nur-Sultan January 17, 2022

Speculation that ex-president of Kazakhstan, Nursultan Nazarbayev, has passed away heightened on January 16 when Russian news outlet RBK reported that authorities in the country would neither confirm nor deny a claim made by Vladimir Zhirinovskiy, leader of the Liberal Democratic Party of Russia, that he is “already dead”.

Observers noted that the authorities in the past have been quick to deny reports of the death of Nazarbayev, 81, during his prolonged disappearances from the public eye. When last seen in public at the end of last year, Nazarbayev appeared to be in a frail condition, leading to speculation that the former president—who ruled from 1990 to 2019 before resigning and maintaining huge influence from behind the scenes—was seriously ill. It would not be unusual for a Central Asian country to not immediately announce the death of a leader to its people. For instance, after the passing away of Turkmenistan’s ex-president Saparmurat Niyazov, known as Turkmenbashy, in 2006, there were claims that he had died several days before the officially announced date. And the health condition of Uzbek leader of a quarter of a century Islam Karimov was a closely guarded secret until officials finally on September 2, 2016 announced his death after unconfirmed local reports released days earlier that he was dead.

In a report published on the afternoon of January 16, the Guardian quoted a former western government official said to be well connected in Kazakhstan as saying: “My best information as of today is that Nazarbayev is alive, and furious negotiations are under way with Tokayev about the redistribution of assets, spoils and rents.”

Not a word from Nazarbayev was heard during or after the unprecedented countrywide unrest seen in Kazakhstan at the beginning of January.

Much of the anger expressed by demonstrators was directed at the former leader—who bears the honorific title of “Elbasy”, or “Leader of the Nation”—and President Kassym-Jomart Tokayev—previously regarded as the handpicked successor fo Nazarbayev who was always likely to do his patron’s bidding—moved to very publicly strip Nazarbayev of his powerful role as head of the national security council, taking the role for himself.

As Tokayev invited in Russian troops to help restore order in the country, rumours mounted that Tokayev’s people and the Nazarbayev clan were both attempting to exploit the crisis to pull off a coup. Tokayev appears to be targeting the extended Nazarbayev family’s control of key industries and sectors in the country.

The strategy seemed to gain pace on January 15 when the sovereign wealth fund Samruk-Kazyna announced that two of Nazarbayev’s relatives, Dimash Dosanov and Kairat Sharipbayev, were no longer heading a pair of Kazakh energy firms. Kairat Sharipbayev and Dimash Dossanov had quit as chief executives of state oil pipeline firm KazTransOil and natural gas pipeline operator QazaqGaz, respectively, it said. Samruk-Kazyna gave no reasons for their resignations.

On January 8, the authorities announced the detention of Karim Masimov, the former head of the security service, a close ally of the ex-leader and a political goliath who became known as the “grey cardinal” during Nazarbayev’s long rule. He is under investigation for high treason.

'Clean up the mess'

Tokayev, meanwhile, has ordered authorities to “clean up the mess” at the Kazakh-Chinese border, with particular attention to be paid to corruption in the Kazakh customs authorities. These authorities are known to be tied to the former president’s brother Bolat Nazarbayev.

Adding to speculation that Tokayev is attempting to break with the past to start a clear post-Nazarbayev era in which he asserts his own unhindered authority and does not move to prevent the destruction of the personality cult of his predecessor, the president last week hit out at the “oligarchic groups” for a widening wealth gap that helped spark what were the largest protests in Kazakhstan’s three-decade-long post-Soviet history.

Tokayev essentially targeted Nazarbayev in a speech for the first time, saying  the leader's long reign saw the emergence of an oligarchic class of extraordinarily wealthy people “even by international standards” who choked off market competition in the country.

Announcing a populist move—the setting up a For the People of Kazakhstan national fund that would require contributions from wealthy companies—Tokayev said: "I think it is time they pay their dues to the people of Kazakhstan and help them on a systemic and regular basis."