John Malkovich to turn Skopje into Hollywood of the Balkans 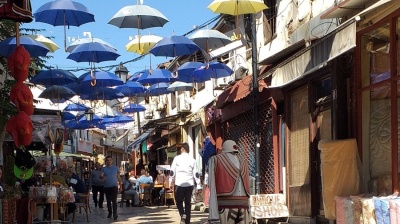 Film and music studios will be set up in North Macedonia’s capital Skopje, where Hollywood-calibre movies will be shot as soon as the government approves the project, US movie star John Malkovich told Skopje-based broadcaster TV21 on August 9.

The studios are planned to be created within the Skopje Technology Park project and will be the first of this type in the Balkans.

Malkovich, whose father is of Serbian origin, and who calls himself “a son of the Balkans” told TV21 that this is an “especially important project” to him and he hopes it will be important for the whole region.

The actor, who is staying in the Serbian city of Zajecar for a performance, said it was decided to call the project Stonebridge Studios after a bridge across the Vardar River in Skopje “to honour the rich culture and incredible history of the people of Macedonia”.

Malkovich, born in Illinois in 1953, is an Academy Award winning actor who has appeared in dozens of films. He is best known for starring in Dangerous Liaisons, In the Line of Fire, The Killing Fields and of course the 1999 Being John Malkovich.

Malkovich said that he is looking forward to visiting Skopje, and hopes the government approves the project.

“We are excited to get to work and create not just Hollywood films in Macedonia, but also to help amplify the already ascending Balkan film, music and art communities in every way possible,” Malkovich said.

Sasha Grujevski, state counselor at the prime minister's office and coordinator of the project, told TV21 that the government in Skopje is seriously considering these proposals.

“We hope that it will come out with a position soon,” Grujevski said.

The Macedonian history of filmography started in early years of 20th century, when the Manaki brothers from the city of Bitola brought the first camera to the Balkans. They were the first filmmakers in the region. In honour of the brothers, North Macedonia holds the Manaki Brothers international cinematographer’s film festival each year in Bitola. This year the festival will be held on August 19-26.

The Macedonian film industry cannot brag about large production, but there are still significant achievements. One of the most known directors is New-York-based Milco Mancevski with his acclaimed movie Before the Rain (1994).

In 2019, Macedonian documentary film Honeyland, which portrays a loner beekeeper in a remote mountain village and directed by Tamara Kotevska and Ljubomir Stefanov, got two Oscar nominations.

Viktor Orban’s latest move is another way of shifting the blame for economic woes following a procyclical and expansive fiscal policy in recent years.