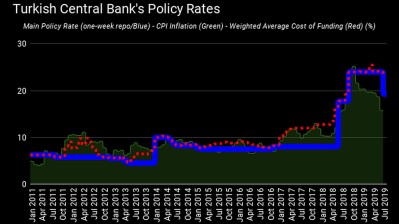 The Turkish central bank’s monetary policy committee (MPC) on July 25 cut its policy rate by a more than expected 425 bp to 19.75%, the biggest such move seen in nearly two decades. The national lender announced the decrease, drawn up to enable a dash for growth in a recession-hit economy, on July 25 in a press release. At the same time, the MPC relayed that it would maintain a cautious monetary stance to support disinflation.

“I love that they cut 425bps and they are maintaining the cautious stance!” Timothy Ash of BlueBay Asset Management said in an emailed note to investors.

It is not the first time that the Turkish government—and yes, let’s not beat about the bush any longer, it is the government that is cutting the rates, turning Donald Trump from his usual orange to green with envy—has set out to fool everyone.

It’s all a jape
It’s all a jape, no-one in their right mind can believe the Erdogan administration’s economic logic—or for that matter, figures—anymore, but there are plenty of low ballers out there ready to turn a blind eye to the poisonous habits that have set in during the post-2008 financial crisis era as they pick up the country’s eurobonds and companies on the cheap and stocks at appetising ratios. The wily Erdogan always manages to offer everyone something—particularly fellow populists such as Trump, never not on the lookout for a poll boost from, for instance, freeing an imprisoned pastor going spare, or Boris Johnson, now appointed japester-in-chief as UK PM.

To be sure, there were some arguments in favour of a cautious rate cut—the Turkish lira (TRY) boasts one of the highest implied returns in the world when adjusted for inflation and that, along with the prospect of monetary easing by the Fed and European Central Bank, is boosting the nation’s assets, with Turkey’s average local-currency bond yields at 16%, the highest in Bloomberg Barclays’ emerging-market index after Argentina—but for crikey’s sake, Erdogan is a president who just fired his central bank chief for not doing his bidding and then brazenly stated that the new guy in charge would spend the rest of this year on the easing curve. How could he know that if the central bank even retained a scintilla of independence? But be careful what you say if you have ‘proceeds’ at stake, for he and his praetorian guard are quick to take offence (all part of the routine, doncha know).

“The accusations against the country range from President Recep Tayyip Erdogan’s alleged authoritarianism at home to undermining Nato abroad. These charges are baseless,” Erdogan’s spokesman Ibrahim Kalin—said to have lost ground to newly-appointed communications director Fahrettin Altun in Turkey’s ‘Game of Thrones’— wrote as if he were truly affronted in an op-ed entitled “No, Turkey Has Not Abandoned the West” for Bloomberg.

His piece came in response to an orientalist fable headlined “Turkey Has Abandoned the West. Good Riddance” put out by Bloomberg’s “Editorial Board”.

More sober analysis
Getting back to some more sober analysis (although, truly, only the inebriated can puzzle out Turkey as it stands right now), the MPC breathed: “Inflation is likely to materialize slightly below the projections of the April Inflation Report by the end of the year.” In April, the central bank left its end-2019 consumer price index (CPI) inflation forecast unchanged at 14.6%.

However, Jason Tuvey of Capital Economics, in a research note entitled "Erdogan gets his way with aggressive rate cut", justifiably warned: “Further aggressive easing lies in store over the coming months. But this is likely to cause the lira to weaken and inflation to rise again. The central bank will probably have to reverse course before too long.”

Let’s keep being rude
But let’s keep being rude about Turkey, now that economic officials there as a matter of course think it is just fine to insult the rational observer’s intelligence. The MPC seems confident that statistical institute TUIK will keep cutting the official inflation figures, allowing for policy rates to be cut back based on the presented data. Note that I didn’t write that the MPC seems confident that the TUIK will actually have the data to allow it to keep cutting the official inflation figure.

You see, times are now getting so good in Turkey that the lira would remain under control even should an atomic bomb be detonated underneath the central bank.

“[The cut is] larger than the 250bp cut that both we and the consensus had anticipated. The lira weakened following the decision but, at the time of writing, is actually up on the start of the day,” Tuvey noted.

Once upon a time, there was a currency that was thought to be subject to a floating exchange rate regime, and there were some official inflation figures suggesting a sharp declining trend…

How long Turkey’s latest Tulip Era may last remains in doubt. There is no available market research based on the economic realities. All there is to go are the synthetic official figures and the manipulated exchange rate.

“Interesting in my mind that the growth cycles/sudden stops in Turkey are getting shorter—2006-2012/13 then to 15/16, and to 2018. So six years, then three, then two, and the next cycle…,” Ash said in response to a Bloomberg op-ed entitled “Erdogan Economics Weaponized as Central Bank Looks to Cut Rates”.

“Turkey is about to embark on one of the greatest central banking experiments in emerging markets—and the timing couldn’t be better,” Cagan Koc of the news agency observed, prior to the MPC meeting.

Well, just to remind you folks, given the dangers of forgetting thanks to blithe mainstream media reports, not only was Turkey’s central bank governor lately fired, the US Congress keeps pressuring Trump to sanction Turkey over its penchant for buying Russian missiles, the real economy in Turkey has crumbled and summer won’t last for ever. But in the ever-expanding populist madness, with “Britain Trump” (as the grammatically challenged US president described new UK PM Johnson) now taking to the big stage, who knows how long the distractions of bluff and bluster and the fake taking of offence can last. Long enough, for the conned to slip over the cliff-edge, very likely.

“The agenda is to lift growth at all cost and to lift the cloud hanging over the ruling AKP,” Ash also said following the MPC announcement.

Risk of desire
“The main near-term risk for Turkey is the authorities’ desire to boost growth via lower interest rates and credit expansion, which could jeopardize the stability of the TRY, as policy stimulus widens the current account deficit and requires more external funding,” Ugras Ulku of the Institute of International Finance (IIF) said in a research note entitled “Turkey: Idiosyncratic Risks Weigh On Outlook”.

Turkey is the only country in the Central and Eastern Europe Middle East and Africa (CEEMEA) region where output is projected to decline in 2019, he added.

The ongoing Kamikaze-style policy making for the Turkish economy remains one of the main supporting arguments driving rumours that Erdogan is in fact getting ready for snap elections to catch the strengthening opposition on the hop. If that’s the case and voters buy into it, cheap money could eventually bring about an expensive ending for any hopes of one day developing sound markets that will stand the test of time and not require vast swathes of the restive part of the population to be subdued with the practices of authoritarian polarisation.

ISTANBUL BLOG: Coup for who?

ISTANBUL BLOG: The tragedy of Adem Yarici and the “perception operatives”