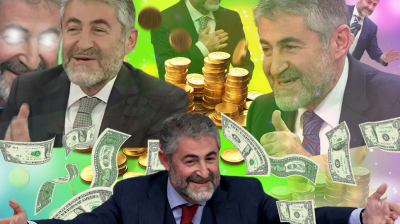 Unlawful behaviour in the financial markets is not exactly a rare thing. It never has been. Take Borsa Istanbul. It’s seen countless “robberies” since it was launched back in 1985. So, shall we move on? Not so fast. Right now, Turkey’s stock market deserves more than a cursory look. For, the sleaze oozing from latest events at the Istanbul exchange has to be marked down as unprecedented. Unfortunately, it all fits in with the nauseating, inescapable analysis that there isn’t a nook or cranny of the Turkish nation where you won’t find the destructive tentacles of the Erdogan administration.

Since 2020, this column has been using the “Casino Istanbul” idiom to describe the workings of the Turkish stock market. Prior to the phase of the last three or so years, there were hedge funds on the scene who used to run manipulative operations in the so-called blue-chips. But the most recent years have seen the great majority of foreign investors departing the market, leaving it in the hands of local gangsters, who mainly work the small trading board. Currently, there are some foreign funds that hold positions in a few companies. But their share in the market hovers around a historical low.

In the market where foreigners now fear to tread, namely that covered by the big trading boards, the trades are clearly driven by a pro-government set-up. All price movements turn out in favour of the government. The sovereign wealth fund is among those (TWF/TVF) on the scene.

Beholden to the trading of local investors, the stock exchange broke consecutive records in lira terms despite the consecutive monetary policy errors of the central bank (proprietor: President Recep Tayyip Erdogan). The latest disgrace on the exchange began in banking stocks in the second half of August. Those glued to mainstream media, would have simply heard how strong profits were propelling Turkish banking shares. But all was not as it seemed.

Through the end of August, banking stocks leapt to crazy heights. Subsequently, until September 12, the stocks were locked at the price ceiling for two weeks. These kind of price movements have always been seen in the small stocks. They are described as a “bull trap” in English. In Turkish, there is a better coinage, namely “keriz silkeleme”, which we might translate as “shaking off the klutzes”.

Chart: Can you follow the outline of a “keriz silkeleme”?

In the case of the banking stocks, such an undeniable “keriz silkeleme” stood out as pretty weird even by Borsa Istanbul standards. It was pure amateurism that unmistakably pointed to the imprint of the current government of the country (we might say that the Erdogan administration holds the patent for this level of bungling).

On September 12, there were claims that finance minister Nurettin Nebati had inadvertently confirmed that the government was aware of the strange goings-on (such movements in the leading stocks of the sole exchange of a country can surely not escape the observer, even one of Turkey’s magnificent serving ministers) by inviting all Turks to reap rewards from booming returns on Borsa Istanbul.

Only in Turkey do you get a finance minister who provides his citizens with direct investment tips. Note that you can in fact buy Turkish citizenship by acquiring an apartment for a price tag of $0.4mn or higher. Don’t miss your chance.

After Nebati said what he said, there were plenty in the mainstream who defended the minister by, putting it politely, saying he was only guilty of the blunder of one not very experienced as the political head of a ministry. Yes, he made an ass of himself, but his words were not proof of direct government involvement in the “silkeleme” for the “silkeleme” did not exist.

A cool story, an extraordinary sequence of events—but there was one not so negligible detail. When some stocks, for no identifiable reason, make a concerted attempt at bulldozing the price ceiling, Borsa Istanbul is obliged to ask the concerned company whether there is some news not filed to the public disclosure platform (KAP) that it should know about. But Borsa Istanbul did not ask the concerned banks whether they had something to disclose about what was going on. It did not query whether they had abruptly and collectively found some treasures stashed under their headquarters.

There remain some unanswered questions about the government’s participation in the scheme. The government has an unlimited supply of lira. It could have forestalled the ongoing downswing. But it did not do so.

The boom in the banking stocks was driven via the Borsa Istanbul Derivatives Market (VIOP) over leveraged positions. Following the plunge, the margin calls generated a crisis.

Ahlatci Yatirim, a brokerage owned by an Erdogan-supporting businessman, Ahmet Ahlatci, was identified as carrying the biggest short position. The brokerage owner responded that Mehmet Akdere, a customer and well-known market “masseur”, was carrying the position, not the brokerage. He also said that Akdere was carrying out transactions via 10 more brokerages, not just through Ahlatci. You’d be hard-pushed, of course, to find observers who buy the story that the whole scheme was carried out by a single player.

So, as per usual with Turkey and its markets, the identities of the perpetrators are not clear. And it can be expected that they will never be clear.

At the height of the rally, the Akbank pension fund announced on September 13 the sale of a 0.15% stake—an obvious bid to benefit from the price surge. Akbank (AKBNK) is a unit of industrial conglomerate Sabanci Holding (SAHOL). So, it would seem that Akbank and Sabanci were not involved in the scheme.

The price collapse, meanwhile, continues. As the margin calls come in, the capital of brokerage houses is eroded. When the customers cannot fulfil their margin call obligations, the brokerages are supposed to do it in their stead.

On September 20, government-run Halkbank (HALKB) and Isbank (ISCTR) were seen buying up their own shares on the market. Halkbank said that it purchased 3% of its own shares. The Isbank pension fund said that it bought a 0.05% stake in Isbank.

There appear to be stakeholders of all sizes who took part in the rally who are currently trying to avoid a systemic shock.