ISTANBUL BLOG: Now you see it, now you don’t 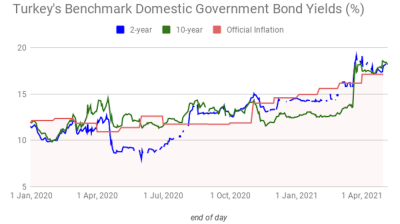 In the previous borrowing programme, covering April-June, the ministry also dropped the 10-year auction, which was scheduled to take place on April 14.

After dropping the 10-year auction from the May programme, the ministry added a euro-denominated domestic bond auction, Cumhur Ornek of BloombergHT noted on May 3 in a tweet.

It also added a 10-year CPI-indexed auction for June, he said.

Do excuse us, but once again we find ourselves proposing that the Erdogan family’s distance from good economics literature coupled with the courage of ignorance is again producing trouble for the Turkish economy.

The reason was so logical it reached a height that would make Aristotle, the father of plain logic, plain jealous.

Lately, the Treasury held switch auctions to lengthen the maturity of its short-term bonds, but it seems comfortable with its FX-debt load, which causes significant jumps in lira terms over currency depreciation.

The incumbent finance minister, Lutfi Elvan, appointed last November, has been heavily praised for being “orthodox”.

Currently, the foreign investors’ share in Turkish domestic bonds is below 5%. The finance ministry does not even put its domestic borrowing programme on its English website anymore.

Since 2019, it has been hard to describe the local domestic government bond market as a functioning market

Nevertheless, the government has absolute control over the local finance industry and has no problem with domestic borrowing.

ISTANBUL BLOG: Meet “The Botox”, the mafia boss who’s singing like a canary about the Erdogan regime on YouTube