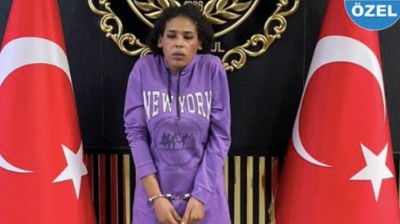 Following the bombing, Turkish police were remarkably quick in seizing a suspect in a raid and parading her in front of the cameras as the alleged bomber. / Turkish police.
By Akin Nazli in Belgrade November 15, 2022

Turkey’s government is yet to come up with a logical explanation for the November 13 Sunday afternoon bomb attack on a busy shopping avenue in Istanbul. The media mill, meanwhile, has been in overdrive, warping the popular understanding of the situation by spreading out of context machinations. And homo sapiens has of course been doing its best on social media.

Image: So far, only Mr. @drsahr has solved the case since he knows the reliable sources with whom he should follow up all leads. (Here is the link to the story for those chasing up the MHP bombed Istiklal Avenue hypothesis.)

As of November 15, two days since the attack, the media frenzy is losing its bubble, despite efforts from Erdogan administration officials to raise it above a simmer by talking absolute bloody nonsense and sharing a mish-mash of visual materials across media.

On November 14, Turkey’s interior minister, Suleyman Soylu, declared war against the US. He said that the US, given its alliance with Kurdish militants in Syria, was responsible for the bombing and Turkey would reciprocate.

On November 15, the head of President Recep Tayyip Erdogan’s junior coalition ally, Devlet Bahceli of the Nationalist Movement Party (MHP), also blamed the US for the attack.

As it happened, on November 15, Erdogan managed to grab a photoshoot alongside US President Joe Biden in Bali, Indonesia, on the sidelines of the G-20 gathering. If there were remonstrations, they were kept out of view.

It remains impossible to treat those who make up the Erdogan regime as a group of serious people.

So far, a great amalgamation of misinformation, disinformation and mal-information let loose on a confused public does not provide any rational explanation for what happened on the Istiklal boulevard and how relates to the bigger picture of what is happening around Turkey, gearing up for elections by June.

It will take time to access some real and meaningful information. By then, the current madding crowd, clicking on headlines in a convulsion, will have forgotten the name of the bombed street.