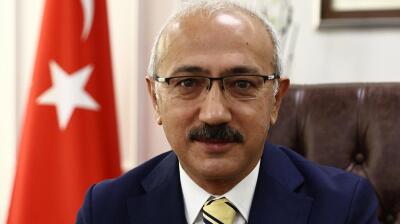 Finance minister Lutfi Elvan has been praised for being "orthodox".
By Akin Nazli in Belgrade May 9, 2021

The Turkish Statistical Institute (TUIK) has filed a criminal complaint against the Independent Inflation Research Group (ENAG), Turkey’s finance minister Lutfi Elvan—who quite ludicrously wins praise for being “orthodox” at the side of the rather “unorthodox” President Recep Tayyip Erdogan—said on May 6 during a televised interview on CNN Turk, an Erdogan media TV channel.

That’s right. Turkey is a country where a finance minister—who has most probably never seen a recommendable finance or economics textbook in his life—urges prosecutors to “do what is required” about some professors of economics who are conducting scientific studies on economics.

“It's absolutely out of question that the TUIK is playing with the numbers and that the inflation rate is 30-40%,” Elvan also said during the interview. The TUIK, to much derision among ordinary Turks, presently claims annual inflation is runnng at 17%.


Meanwhile, on May 7, Mustafa Sen, a senior official in Erdogan’s Justice and Development Party (AKP), asserted that opinion polls showing the AKP vote at below 30% do not reflect the truth.

But let’s immediately get back to the hapless professors because, according to Elvan, the TUIK’s filing of a criminal complaint against “this group” is an historical first. Wow, there's nothing quite like groundbreaking government.

Separately, Elvan separately stated that the TUIK may release an official GDP growth figure of 5.5-6% for Q1, a double-digit number for Q2 and a figure higher than 5% for 2021 as a whole.

Back on April 19, Elvan was already talking about his official GDP growth release expectations for Q1 and Q2. His expectation for the full-year 2021 figure is something new. The IMF expects 6%. On condition that Turkish President Recep Tayyip Erdogan remains in power, the stakes in this public auction may rise higher towards March 2022 when the 2021 official GDP growth figure is due to be released.

The TUIK, which filed the complaint against ENAG at the Istanbul (Anatolia) chief public prosecutor's office on February 14, is seeking a judicial fine of Turkish lira (TRY) 20 per day against the group, daily Cumhuriyet reported.

According to Anka news agency, the complaint was filed during the term of someone who headed the TUIK for 15 days.

The rotation at the statistics body is faster than that at the central bank. You’ll have to look into reports from global finance news services if you are interested in which TUIK heads were orthodox and which were not. We have lost the thread.

On April 5, ENAG filed a statement of defence in which it stated that it has stayed in compliance with statistics legislation.

It is still unclear whether the prosecutors’ investigation will result in a court case against the group, Veysel Ulusoy, head of ENAG, told Bloomberg on May 8.

Elvan’s call for the prosecutor’s office “to do what is required” during his TV interview was a clear attempt to accelerate the investigation.

But Elvan might still be considered only a little pot. Does his intervention stand a chance of heating up the process any time soon?

The method he has pursued is indeed one of the common ‘judicial processes’ in Turkey. Accordingly, at least when Erdogan is involved, the country’s judicial process works as follow:

-        Erdogan points out some people as targets on TV. He always “believes that the law will do what is required”.

-        Robocops raid the homes of the people in question during the small hours.

-        And, the people in question wait in jail pending trial for a few years.

If Elvan gets nowhere in attempting to accelerate the investigation, the TUIK can try its chances with the organised crime control bureau as ENAG is a “group” of people.

Where Erdogan is concerned, there is no requirement for a group. One person alone is enough for the alleged “crime” to be pursued as organised crime. A single person’s home can be raided by the organised crime bureau.

The secretive “Pelicans” group, led by Elvan’s predecessor, Berat Albayrak, is said to have built a nest at the Istanbul (Anatolia) Palace of Justice. Another option to consider.

But if Elvan can manage to grab an appointment with Erdogan to present his troubles, that would be the fastest way to get some action.

-        They file thousands of complaints at the Cimer (the Presidency’s Communication Centre).

-        There is no raiding of homes in the small hours in this process, but there is a call from the prosecutor to testify.

Currently, Mehmet Ceyhan (below), head of the Infectious Diseases Association, is a target of this process. A few days ago, trolls launched the hashtag #mehmetceyhantutuklansin (#mehmetceyhan shall be arrested).

Someone has filed a complaint against Ceyhan at the Cimer, the association head, 64, told Halk TV on May 7.

This amounts to a message to all doctors who publicly show any scepticism towards the official daily coronavirus (COVID-19) case figures (currently nosediving again to much expert astonishment).

So far, however, the individual who is subject to the most absurd Cimer investigation is Istanbul Mayor Ekrem Imamoglu.

Imamoglu is currently being probed for folding his hands behind his back at the tomb of Sultan Mehmed the Conqueror.

The mayor, who defeated an Erdogan candidate to win his post, just loves this investigation too much. He talks to the media about it every day.

For a while, with whomever he met, the joke was always about how he won the same election twice (Imamoglu’s first victory was challenged by the Erdogan camp, which demanded a rerun, a rerun that resulted in a crushing landslide for Imamoglu in one of the few redeeming days of recent years for those still professing hope for the growth of Turkish democracy). Now, the mayor wants to hear jokes about the tomb posture investigation.

When the investigation was first launched, who was conducting it was publicly unknown.

The patron of the investigation could not be found. One Erdoganist claimed on CNN Turk that Imamoglu may have filed the complaint against himself. Imamoglu found this claim “creative”.

Then, the man who said he filed the complaint at the Cimer was found.

Interior Minister Suleyman Soylu said he thought what occurred was a crime, but also decided that he would not permit the investigation into Imamoglu’s hands.

By the way, for real crimes such as homicide, the Turkish judicial process typically works as follows:

ISTANBUL BLOG: Meet “The Botox”, the mafia boss who’s singing like a canary about the Erdogan regime on YouTube