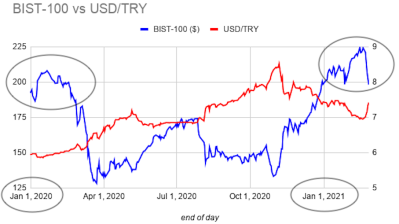 When it comes to financial markets and the destiny of exposed markets, history never gets bored of repeating itself. There are indeed centuries-long vicious cycles.
By Akin Nazli in Belgrade February 28, 2021

The last trading week of February was an unsettling one for Turkish markets, which took a swan-dive on a sharp sell-off in emerging market assets. The USD/TRY rate retreated into the 7.40s from the 6.95s while the Borsa Istanbul’s benchmark BIST-100 tested below the 1,500-level.

It was in December that bne IntelliNews first noted the possibility of a shake-up in global markets in February.

The reason for serving the warning was simple. All financial asset prices have reached their lower or upper limits, testing their historical “support” or “resistance” levels, while at the same time there is nothing left with which to further pump the bubbles.

It follows that some fluctuation is required to create some volatility. There is no profit to be had if there is no volatility.

The central banks have printed money at unprecedented levels. Fiscal expenditure booms are already priced in. The pandemic, meanwhile, has never managed to find a place for itself in prices, except for a short period in March and April of last year.

Unrealistic growth surge expectations in the real economy did their job in the new year rally. Commodities prices have been boomy due to supply shortages and financial speculation, not because of rising demand. As a result, inflation threatens to materialise with a roll of thunder.

Policymakers led by the Fed and former Fed chair Janet Yellen, now heading the US Treasury for the Biden administration, have been working to convince everyone that all these problems are temporary and the money printing will continue.

The Fed looks primed to step in to press harder on US Treasury bond yields. Those yields, the inflation figures and gold prices will be watched to track whether “a correction” or a managed burst can be achieved rather than policymakers and the finance industry, led by the Fed, losing control.

The global economy has a problem if the policymakers have no plan to prevent a stagflation (high inflation and recession at the same time) risk in the event that the coronavirus vaccination drives do not deliver a combined production and consumption lift-off.

When it comes to Turkey, the Erdogan regime in November, not liking the prospect of another balance of payments crisis, swallowed humble pie and returned to one of the less classy cabins on the global finance ocean liner. And it is simply normal that Turkey remains among those who feel the most queasy when the captains take the vessel into turbulent waters. The country has never been able to afford a genuine upgrade.

If the policy rate is cut in the coming period, investors in domestic government bonds will write profits, but USD-basis returns will depend on a possible lira depreciation that would follow the rate cut under normal conditions.

Portfolio flows via Turkish banks’ swap transactions in London have been slowing and eurobond auctions stopped in February.

Turks remain devoted to their FX and gold, and once more their devotion has been shown to be wise.

On February 14, we noted: “Even a smooth reversal in the hot money inflows could light up the Turkish markets.”

As per usual, a sell-off in EM currencies followed ultra-bullish calls on the USD/TRY. The magnitude of the deterioration, the longevity of the global markets shake-up and the course of financial flows will be watched now.

The change in fortunes has occurred over just a few days and the Turks are still not aware of the lira’s latest slide. The all-time weakest rate stands at 8.59, meaning at this point the Erdogan administration has some comfortable distance from the “Dollar breaks fresh record” clamour.

On March 3, Turkey’s institute for officials statistics, TUIK (or TurkStat) is to release its inflation figure for February. The finance industry has been calling above 15%, a figure that would add to pressure on the 17% policy rate.

On March 18, the central bank is to hold a rate-setting meeting.

More “orthodox” than Bartholomew I

Turkey’s new central bank governor, Naci Agbal, who was praised for being more “orthodox” than Bartholomew I of Constantinople, until the time came for a sell-off and the start of demands for higher interest rates, will now feel the pressure to remake himself as hardcore orthodox, far more orthodox than the patriarch.

The comedy here is that Agbal and new finance minister Lutfi Elvan are Islamists, and they are long-term employees of Turkish President Recep Tayyip Erdogan.

Agbal for the first time in his life learnt the location of Turkey’s central bank when he turned up at the building as governor. Elvan did not even study economics at university.

If we are up to remaining faithful to seriousness, let’s recognise that nothing has changed in the management of the Turkish economy except for the offering of high interest rates and some cosmetic touches after the weekend of shocks in early November that led to the sudden departure of Agbal and Elvan’s predecessors.

Turkey’s missing reserves dilemma even grew worse in December. Haluk Burumcekci of Burumcekci Consulting will most probably release figures for January in his daily bulletin on March 1.

On February 24, the central bank played with the reserve requirements for local banks. It was a rumble from the so-called past when rate hikes were forbidden. It did not suit the idea that Agbal cleaves to orthodoxy. But no one cared, the central bank chief and his excuse were cut some slack.

On February 26, the central bank sold $141mn of USD contracts on the Borsa Istanbul Derivatives Market (VIOP). It was its first such sale in 2021. The public banks have “given a slight shoulder to the central bank in the spot market”, @e507 wrote on Twitter.

Business as usual. And it is not good news for the lira. It looks like Erdogan does not have enough reserves to haughtily walk out on the finance industry, the way he did from end-2019 to November 2020.

What the markets would give to run a check on his state of mind. His chances of winning the next election continue to nosedive. The stress is mounting. He’s lost his pal in the White House. It’s hard to rule out Erdogan doing some more crazy things.

The dilemma is that amid the pandemic conditions, the president has been transferring wealth abroad at a 17% rate, the highest rate you will find compared to peers all around the world. The finance industry wants more. Nobody ever said it wouldn’t.

The number of those going hungry in Turkey grows relentlessly. Turkey’s main opposition party is a sluggish affair, but it is challenging Erdogan’s well-known device and artifice—that of attempting to divert the country’s attention from its real, pressing woes to the fight against the proscribed Kurdistan Workers’ Party (PKK) and the Kurdish conflict.

Still, Joe Biden won’t want to burn too many bridges with Erdogan; the Middle East is too fraught an affair to go around making an enemy out of a Nato ally. Thus, the pressure from Washington will be limited, with Biden pulling his punches on Turkey’s leader to keep him onside and available as a subcontractor for issues such as hindering Iran’s proxies in Northern Iraq.

But the home front could become a mighty headache for Erdogan. His base could slide from under his feet given the growing poverty and the hunger gnawing away. Domestic politics, social dismay and the latest lira depreciation will be the boss’s main troubles in the period ahead. He faces a tough shift. It could lead him to some frenzies.

ISTANBUL BLOG: Portfolio outflows decline but Turkey not out of the woods yet