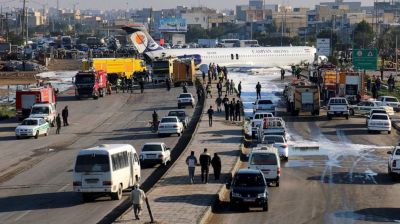 The airliner ended up on its belly in the middle of a highway.
By bne IntelliNews January 27, 2020

A Caspian Airlines plane with 135 passengers on board slid off a runway on to a city highway after landing at an airport in southwestern Iran on January 27. However, nobody was hurt in the incident, Iranian state media reported.

It was Iran’s third incident involving aircraft difficulties in as many days and served as another reminder that the country is struggling to keep its ageing plane fleets in working order despite a lack of available parts caused by the application of US sanctions.

The plane, which flew to Bandar Mahshahr from Mehrabad Airport in Tehran, was captured on social media channels lying on its belly in the middle of a city boulevard next to the airport (video).

Mahshahr Governor Mohsen Beyranvand said control of the plane was lost on the airport runway due to a technical failure. “It skidded off the runway, crossed the road, and stopped on Mahshahr's entrance street," IFP quoted him as saying. "The officials involved are trying to dump fuel from the airliner so that they can return it to the runway as soon as possible," he added.

“The plane did not catch fire and all passengers safely left the plane,” managing director of Khuzestan Airports Mohammad Reza Rezaei was quoted as saying by IRNA.

An unverified video shared on social media showed passengers being evacuated from the plane.

On January 25, an Iranian Airbus A300 flying from Tehran to Istanbul made an emergency landing at a Tehran airport because of a technical problem in which the pilot “felt the engine shaking”, local media reported. On January 26, the departure of a Gorgan-to-Tehran Fokker-100 flight was cancelled due to “engine trouble”.'

These incidents come just weeks after Iran’s worst air disaster in the country’s recent history—an Iranian Revolutionary Guards Corps (IRGC) missile gunner shot down a Ukraine International Airlines Boeing 737-300 just outside Tehran on January 8 in a case of mistaken identity. The gunner is said to have calculated that the plane was an incoming US missile. There were no survivors from the 176 people that were on board.

Naftogaz in talks with investment banks over possible IPO
5 hours ago
Polish miners send new warning to PiS government
5 hours ago
Hungarian PM warns of storm clouds ahead in state of the nation speech
16 hours ago
Belarus president threatens to take transit oil from Russia-EU pipeline amid dispute with Moscow
17 hours ago
Serbia and Kosovo agree to restore railway, motorway links
1 day ago