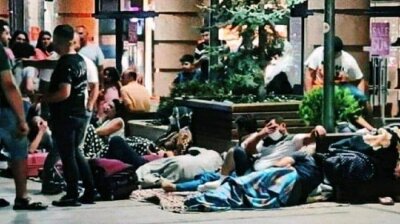 Iranians seen sleeping rough in Yerevan after being turfed out of their hotel.
By bne IntelIiNews July 19, 2021

Many of Iran’s “vaccine tourists” have started sleeping on the streets of Yerevan in response to a tightened law that specifies that they must spend at least 10 days in Armenia before becoming eligible for a jab against coronavirus.

Photos posted on social media show how Iranians have turned to sleeping rough in the Armenian capital, with the amended ruling causing their funds to dry up ahead of the opportunity to get inoculated.

Armenia offers free jabs to anyone arriving in the country. The offer has been snapped up by many Iranians who are struggling to get vaccinated back home, where they face month-long queues. Such was the big response to the free vaccines for foreign tourists initiative, that the Armenian government was forced to introduce deterrents that will be enough to keep away some foreigners in search of a faster route to vaccination.

At the Meghri/Norduz checkpoint on the Armenian/Iranian border, traffic jams caused by “vaccine tourists” from Iran have resulted in long tailbacks, Panorama.am reported.

Armenian Customs said that from June 21 to July 17, around 14,000 Iranians travelled into Armenia, with 10,000 arriving via the land border crossing. During the same period, 35 flights from Imam Khomeini Airport in Tehran brought 3,911 passengers to Armenia.

Tejarat newspaper reported on July 4 that taxi drivers were charging Iranians up to Iranian rial (IRR) 30mn ($122) for round “vaccine” trips from Tehran to the Armenian border, while tour agencies were pushing ahead with increasing daily flights to Yerevan and all bus tours from Iran to Armenia were sold out.

One taxi driver said: “I can make IRR120mn in a day from round trips to the border where people receive their vaccines; people are getting multiple doses at once.”

Armenia has approved three vaccines against COVID-19, namely Russia’s Sputnik V, China’s CoronaVac and AstraZeneca’s vaccine. It initially offered all of them free to foreign visitors. As of July 15, however, foreigners can only be inoculated in Armenia with the AstraZeneca vaccine.

“We didn’t have any special plans to develop vaccine tourism, it happened accidentally,” Alfred Kocharyan, deputy head of the Armenian Tourism Committee, told Reuters, adding that people were also coming from India to get free shots.

“But demand for vaccines has created an opportunity for our travel agencies which I encourage them to take.”

Armenia had administered at least 260,813 doses of Covid vaccines by July 10, according to the Armenian authorities.

According to The Islamic Republic News Agency (IRNA), around 2.7% of Iran’s population have received both doses of an anti-coronavirus vaccine.