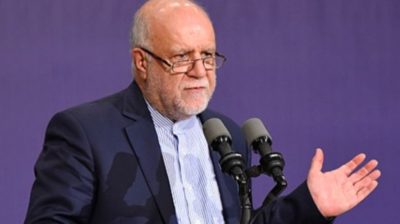 Zanganeh told parliament: “What we export is not under Iran’s name. The documents are changed over and over, as well as specifications.”
By bne IntelIiNews September 25, 2020

Iran’s oil minister has openly admitted forging oil documents to hide the origin of Iranian cargoes of crude that might otherwise not find a market because of US sanctions.

“What we export is not under Iran’s name. The documents are changed over and over, as well as specifications,” Bijan Zanganeh was quoted as saying in parliament by the website of the state-owned National Iranian Oil Company (NIOC).

Since early last year, the US has been attempting to use sanctions to meet its stated goal of driving all Iranian crude shipments off world export markets. Earlier this week, Zanganeh described the ultra-aggressive economic policy as like waging a “war without blood”.

Working out how much oil Iran has continued to export on the grey market despite Washington’s efforts is a complex question for analysts.

On September 25, Reuters reported that three assessments based on tanker tracking showed that this month Iranian oil exports have risen sharply.

“Exports are way up right now. We are seeing close to 1.5 million bpd in both crude and condensate so far this month,” Samir Madani, co-founder of TankerTrackers, told the news agency. “These are levels we haven’t seen in a year and a half.”

The amount was twice that of August, TankerTrackers data reportedly showed, and around 11% of it was ultra light crude, known as condensate.

TankerTrackers, which tracks shipments and oil storage, was also reported as saying that its data showed almost half of Iranian exports were picked up by foreign vessels via ship-to-ship transfers, making it difficult to determine final destinations.

The two other tanker tracking firms, asking not to be named, told Reuters that they were also seeing September increases in shipments, but not to the same extent. One estimated an increase of at least 100,000 bpd.

Refinitiv Eikon data showed Iranian exports of crude and condensate at around 383,000 bpd in August to destinations including China, Turkey and the United Arab Emirates.

China, known as the biggest buyer of Iranian oil on the unhindered market before the US adopted its “zero tolerance” policy, will very likely be the key to Iran’s fortunes in oil sales in the months ahead. Analysts see Beijing as using its grey market decision-making on Iranian oil as a bargaining chip in its trade war dealings with the US Trump administration.

Iran, of course, will also hope for a favourable outcome in the early November US presidential election. Should Joe Biden prevail against Donald Trump, there is every prospect of Tehran enjoying substantially better relations with Washington and the likely removal of US sanctions on its oil and other parts of its economy.

Erdogan steps up ‘Islam’ attack on Macron, calls for boycott of French products

Pro-EU opposition has its best-ever shot at winning the presidency in Moldova
22 hours ago
Zelenskiy scrambles to defuse anti-corruption crisis of confidence in his government
17 hours ago
Lukashenko closes borders, sends top aides to western regions to face down faux NATO threat
1 day ago
Sofia streets empty as most of Bulgaria put in coronavirus “red zone”
1 day ago
Russian residential real estate developer Samolet Group IPOs at a price of RUB950 per share
1 day ago