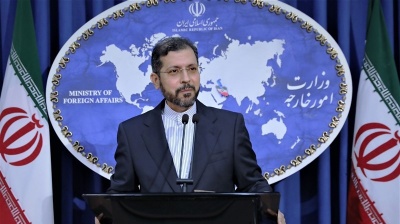 Tasnim on September 6 carried a report of Iranian foreign ministry spokesman Saeed Khatibzadeh denying any link between UK willingness to pay an old debt for the non-delivery of tanks to prospects for freeing detained UK nationals.
By bne IntelIiNews September 8, 2020

A British diplomat named as the incoming new commercial attaché at the UK Embassy in Tehran was on September 7 accused of being a spy by Tasnim News Agency, a news service with strong links to the Islamic Revolutionary Guard Corps (IRGC).

Iran has a long history of suspecting British-Iranian dual nationals or those with partial Iranian heritage of espionage. A certain paranoia is sometimes in play with roots stretching back more than a century when Britain and imperial Russia fought for influence over the then Persia. The fact that the UK has stood aside in the past two years while the US has hit Iran with waves of heavy sanctions has no doubt aggravated the situation.

Margot Arthur—who has an Iranian grandmother and can speak Persian—was accused in the Tasnim report of being “one of the main elements of a plot for infiltration into Iran”.

“The UK government is thinking of sending a woman of British-Iranian ethnicity with a security-related past to act as a commercial adviser,” Tasnim also wrote, publishing Arthur’s name and photograph. “She is a well-known anti-Iranian figure in the cultural arena, and also a staunch advocate of placing mounting sanctions pressure on Iran,” it said.

The article also attempts to ridicule the British embassy, alleging it is taking on an official with no knowledge of trade who has previously done little more than teach English in Cairo.

It also quoted an Iranian “merchant” who said that the embassy’s trade section had anyway been closed for the past few years, with London continuing to limit trade with Tehran due to US pressure.

London's Foreign Office has yet to respond publicly to the article.

Last week, UK defence secretary, Ben Wallace, stated that he was actively seeking to pay a debt owed to Iran for the non-delivery of Chieftain tanks ordered by the last Shah of Iran before he was overthrown in 1979.

It is thought that the UK owes the Iranian government as much as £400m plus interest for the non-delivery. However, if it pays the debt the British government must find a way of doing so that will not breach either US or EU sanctions in effect against Tehran.

Neither Iran nor the UK government formally acknowledges that the release of British-Iranian dual nationals in Iranian jails or under house arrest is connected to the non-payment of the debt, although officials on both sides privately see the unpaid sum as the chief obstacle to the freedom of some of those detained.