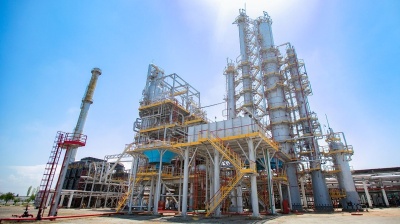 Uzbekistan’s second-largest refinery, the Fergana Oil Refinery, is one of the assets currently up for sale.
By Clare Nuttall in Tashkent July 23, 2021

Uzbekistan’s privatisation process has suddenly accelerated, with UZS1.1 trillion ($105mn) worth of state property sold off in the first half of 2021 compared to just $150mn in the previous four years. The head of Uzbekistan’s State Assets Management Agency (UzSAMA) Akmalkhon Ortikov talked to bne IntelliNews about what has changed.

Privatisation is an important part of the reforms initiated since President Shavkat Mirziyoyev came to power in 2016, of which perhaps the most critical was the liberalisation of the exchange market. But despite deals such as the 2018 secondary public offering (SPO) of the Kokand Mechanical Plant, privatisations have got off to a relatively slow start, and the state still controls around half of the economy.

Ortikov, who took over at the helm of UzSAMA in December 2020, has pledged to revitalise and speed up the process, which he believes will be the driver for the next phase of economic growth. “We are now looking at a new impetus to drive economic growth further, and we believe this new force will be delivered by the process of privatisation,” Ortikov told bne IntelliNews. “The state is not a good manager. The high level of state involvement in the economy – estimated at 50% or more – prevents the creation of a competitive market,” he explained.

Ortikov came to UzSAMA after serving as first deputy minister for economic development and poverty reduction. He was previously first deputy governor of the Namangan and Fergana regions, a position where he says he “came face to face with the problems and issues of privatisation”. On taking over at the privatisation agency, he said his first task “was to analyse what sort of challenges we were facing in the privatisation sphere, and within 10 to 15 days I already knew what kind of concrete steps we needed to take to move this process forward”.

This followed Uzbekistan’s unveiling of its extensive privatisation programme in October 2020, with some of the country’s largest companies set to go either fully or partly private. The list includes Uzbekneftegaz, gold and uranium miner Navoi Mining and Metallurgy Combine (NGMK), Uzbekistan Airways, Uzbekistan Railways and automaker Uzautosanoat.

Of the $105mn of state property sold off in the first half of 2021, $80mn was from the sale of 10 large real estate properties, including Ichan Kala Hotel and the former administrative building of the security services in central Tashkent.

While real estate sales initially dominated, Ortikov stressed that overall “a very wide list of assets from various economic spheres” are being put up for sale. Commenting on the choice of assets to sell off, he said: "it is true that real estate doesn’t require the sort of preparation as state-owned enterprises, but we don’t limit ourselves to real estate. In parallel we are proceeding with privatisations and also transformations of enterprises. Once an enterprise is ready we proceed to preparation for privatisation.”

In total, more than 900 state assets will be put up for sale this year. “If we attain our goals the year, we expect to generate up to $600mn from the privatisation process,” Ortikov said.

Among the assets currently up for sale are 100% of Uzbekistan’s second-largest refinery, the Fergana Oil Refinery, a 57.118% controlling stake in Coca-Cola Bottlers Uzbekistan, 48% of insurance company Kafolat and nine wine and spirits producers. In the financial sector, UzSAMA has received expressions of interest for two medium-size banks, Poytakht Bank and UzAgroExport Bank.

One reason for the sudden success in sales of state-owned assets concerns valuations. When Ortikov took over at UzSAMA he identified valuations as one of the challenges, even though new standards for valuation of enterprises had been adopted in 2020. He believes unrealistic valuations that did not meet market expectations were the main reason that earlier privatisations failed.

“At this point we’re critically evaluating these new standards to see why they are not working, even though they were developed with the support of international financial institutions,” Ortikov said. “When our local valuators value companies the process doesn’t reflect market value of companies. It’s either way too expensive or undervalued.”

Since the February decree paved the way to work with international consultants, UzSAMA has been working with some of the Big 4 firms as well as investment banks Rothschilds and Bluestone, and law firm Dentons. The agency also brought in advisers from Poland, including a former minister of privatisation, to draw on the experience of Poland’s successful privatisations in the early 1990s. In contrast to Poland, which launched its ‘shock therapy’ reforms immediately after the fall of communism, many of the biggest Uzbek companies have remained in state hands until now.

To prepare companies for privatisation, UzSAMA plans to bring in qualified personnel to companies’ supervisory boards as well as introduce competitive selection processes for their management, under a strategy approved by the government in March. There are plans to finalise and approve draft laws on management of state property and on privatisation by the end of 2020.

Some companies are put up for sale by public auction while others – deemed to be of importance to the economy – are sold to investors with the support of consulting companies. For the largest companies – among them NGMK, Almalyk mining and metallurgical complex (AGMK), Uzbekistan Airways, Uzmetkombinat, Uzbekneftegaz and Uztransgaz – there are plans to hold IPOs in Tashkent and on a foreign stock exchange (which one is still to be decided).

Ortikov notes that while Uzbekistan has a local capital market, it “does need further development”. These efforts are ongoing, with the most ambitious so far being the reforms set out in a decree signed by Mirziyoyev in April. Currently the total market capitalisation of the Tashkent exchange stands at around $6bn, or 11% of GDP. Retail investors have started to play the market, now accounting for around 40% of its turnover of about $2mn per month.

To make the process transparent and reduce the risks of corruption, UzSAMa is taking measures such as using public electronic auctions, which reduces the risk of corruption or interference, while also announcing all steps both on its official site and on social media. The formerly employed practice of selling assets for UZS1 to buyers who made commitments to invest was scrapped by presidential decree on July 8.

Uzbekistan is one of just a handful of countries across the emerging Europe region that managed to achieve positive GDP growth last year, despite lockdowns in the spring and autumn. The current privatisation push got underway despite the pandemic conditions, and with the first batch of companies and properties sold off in spring 2021 and more sales in process, UzSAMA is now preparing to keep up the momentum by drawing up a new shortlist of another set of companies to sell off.

With the US threatening Russia with “massive consequences” if it invades Ukraine, Russia has threatened to take “military and technical” action in response. Is cutting Europe off from gas deliveries one of the Kremlin’s options?

Ukraine together with Russia is one of the world’s biggest grain exporters and already the main source of wheat for many developing countries. A Russian invasion of Ukraine would smash its agricultural sector and send grain prices rocketing.

Can Russia cut off gas supplies to Europe?
7 hours ago
President's resignation ends Armenian political calm
12 hours ago
War in Ukraine would send global grain prices soaring, threatening a possible repeat of the Arab Spring
16 hours ago
Uzbekistan: How a power outage sent a country into meltdown
21 hours ago
Emerging Europe M&A soars by 55% to €94bn in 2021
1 day ago