The rot in Ukrainian politics, including the alleged recent sale of seats in parliament for millions of dollars, starts right at the top in Kyiv, claims Andriy Sadovyi, the reform-minded mayor of the western city of Lviv and head of the Samopomich (Self Reliance) party, now his country’s third most represented political force.

Samopomich, led by Sadovyi, secured around 11% of the votes during last year's snap parliamentary elections and became a member of the ruling coalition. The party, which included young pro-Western activists, represented a new generation of politicians who could claim to be “new blood” in the still corrupt and largely unreformed ex-Soviet republic.

After the vote, Prime Minister Arseny Yatsenyuk offered 47-year-old Sadovyi the job of first deputy in his cabinet, but he rejected the offer. Now, tensions between Samopomich and two other members of the ruling coalition, the president’s Petro Poroshenko Bloc and the People's Front headed by Yatsenyuk, seem to have reached a tipping point.

Samopomich has refused to support amendments to the country's constitution, proposed by Poroshenko, that would provide certain self-government rights to Ukraine’s regions, including separatist-held territories in the mainly Russian-speaking East. This move has triggered unprecedented pressure on the party's members in the Verkhovna Rada parliament.

"Our parliamentary faction clearly stated that we were against these amendments [to the constitution],” says Sadovyi, a soft-spoken but authoritative man who has presided over Lviv for the past nine years while balancing often fraught relations with Kyiv and his home city and region's strong Ukrainian identity.

“Many [officials] were displeased with this, and the unseemly treatment of our MPs began. They were called to the corridors of power, where they were pressured," Sadovyi claims, noting that some Rada members from his faction “succumbed to the lures” of the authorities’ proposals and supported the devolution bill. On August 31, five out of 31 MPs from Samopomich voted in favour of the amendments. 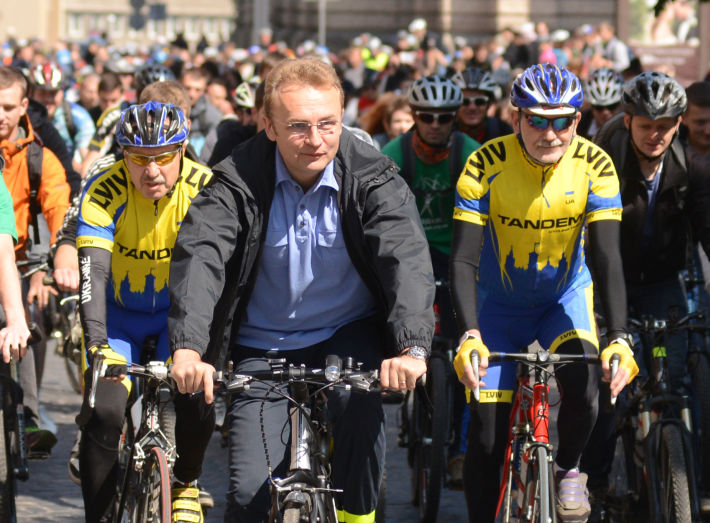 "What are those lures? I believe that the Prosecutor General's Office should determine this,” says Sadovyi. “Because we are hearing a lot of talk about the fight against corruption. But corruption [at all levels] has its origins in political corruption. However, not one case of political corruption has been brought to court in Ukraine over the past 24 years [of the country's independence]."

That issue coincided with another recent flare-up in Kyiv that did not reflect well on the country’s ruling elite. In late August, Tomas Fiala, the Czech-born CEO of the Kyiv-based brokerage Dragon Capital, accused Poroshenko's Bloc and the People's Front of selling seats in the current parliament during last year's snap elections. The cost of such deals ranged from $3mn to $5mn, Fiala said in an interview with Germany's Der Spiegel magazine. Sadovyi is among those who support the allegations.

"This is the truth, however horrible it may be. And the Prosecutor General's Office hasn’t initiated an investigation into the events behind this statement for some reason. But it should do so," he says.

The mayor argues that the 2014 revolution in Ukraine, which resulted in the ousting of former president Viktor Yanukovych, did not influence many "old school" politicians, who simply "took up new slogans", he says. "They speak beautifully, but do nothing."

"However, they do not understand that Ukraine is changing. And people who are now in very high posts should understand that if they do not change, they will be changed [by Ukrainian society],” he continues. “Today, there are growing pressures on our society. This pressure is potentially explosive, as life has not improved materially. And people see that people who obtained money dishonestly are still walking freely and smiling; they don’t feel any pressures from the fight against corruption."

The mayor believes that the current elites in Kyiv take a shameful approach whereby people occupying senior positions merely "do what they are told to do".

"These people are not independent decision makers," Sadovyi says, pointing to Ukraine's prosecutor general, Viktor Shokin, who was appointed in February after his predecessor, Vitaly Yarema, resigned amidst accusations that he had failed to investigate landmark crimes, including the murder of Euromaidan protesters in 2014 and the corruption schemes of Yanukovych and his allies.

That Shokin “is to be found in the presidential administration more often during the day than in his own office” actually provides answers to many questions, the mayor believes, noting the lack of visible progress in tackling the widespread corruption eating away at Ukraine’s institutions and society: “We do not see any real results after notorious facts are unveiled that would cause a storm of emotions in other civilised countries."

But the unfortunate status quo is that there is no real expectation in Ukraine for high-level government officials to have a squeaky clean reputation anyway, he says. "Retirement [in the wake of suspicious behaviour] happens very rarely. It's a pity. If the government does not have the confidence of the people, it has no opportunity to function [properly]," Sadovyi tells bne IntelliNews.

His years in his post accord him respect as a long-timer, but no immunity from danger. His current and second term of office has been especially difficult. In July and December 2014, his home came under fire from anti-tank missiles launched by unknown perpetrators.

Fortunately, there were no casualties as a result of these incidents, which sparked rumours of this being a nationalist backlash against him, or even a lesson sent down from the centre. Little light was shed on the attacks, despite the investigation being headed by Ukraine’s SBU national intelligence service and accompanied by assurances by the president, prime minister and speaker of parliament that the situation was "under their personal control".

"I always say what I think, whether other people like it or not. I acted this way during [the presidency of Viktor] Yushchenko, under Yanukovych, and I am doing it now when Poroshenko is president. I voted for him, and I feel a responsibility. Who will tell the truth if I do not do so? Should I keep silent? I will not," Sadovyi says,

After the controversial vote on constitutional amendments that saw deadly clashes between the police and far-right movements outside parliament on August 31 (three people died and 120 were injured in a grenade attack), the Radical party of Oleh Liashko, which opposed the bill, exited the ruling coalition.

The Batkivschyna (Fatherland) party, headed by former prime minister Yulia Tymoshenko, also voted against the document and is now sending signals that it is ready to abandon its alliance with Poroshenko's Bloc and the People's Front.

Samopomich is not ready to take such a radical step, at least for now. "There is a very serious crisis [in Ukraine]. Crimea is occupied, as well as some parts of Luhansk and Donetsk regions. There are a lot of problems in the administration of the country. And if the parliament also collapses, this will definitely be exploited by our enemies," the mayor says. "That is why we will stay in the coalition until there is a prospect of change."

Sadovyi adds that he is relying on "hard talk" by leaders who represent other political forces that remain in the ruling coalition – Poroshenko, Yatsenyuk and Tymoshenko. However, the president and prime minister “are avoiding talk”, delegating to representatives to enter various negotiations, he says, despite the fact that final decisions in their parties are usually made personally by the president and prime minister.

He also believes that the EU and US, which have significant influence on Poroshenko and Yatsenyuk, should use their leverage and "send a clear message" that "it's necessary to forget about Byzantine-style politics and to act in a way that is customary in all civilised countries: we need open, honest and principled work at the negotiating table".