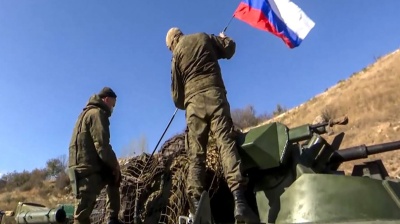 Containing much new information gleaned from interviews with officials and well-connected sources in Yerevan, Baku, Stepanakert and Moscow, the report contains a wealth of new information. Key among its points is the revelation that Azerbaijan pushed in February for a new, formal agreement on the mandate of the Russian peacekeeping force in Karabakh, one that would exclude Armenia as a signatory entirely. Much of the additional new info in the ICG report was summarised by RFE/RL in their writeup of the report today.

The report says "a handful" of ethnic Armenian civilians have been detained by Azerbaijani soldiers while they were on their way to tend orchards or cattle in pastures, having "no reason to think they had left Armenian-controlled territory."

"The soldiers released them all within hours after family members or neighbors raised the alarm with de facto authorities and Russian peacekeepers," the report says. One senior Azerbaijani official told the ICG that "the detentions were errors" and the "door should remain open to any unarmed Armenian."

Citing reports by RFE/RL, ICG says the "fragility" of the ceasefire has already been highlighted by tensions that "flared in mid-May as Armenia and Azerbaijan disputed new positions established by Azerbaijani forces" close to their shared border.

With Russia as the main foreign mediator between Armenia and Azerbaijan, ICG says Moscow's influence and the Russian peacekeeping mission "helps settle many problems, but not all of them."

"Skirmishing in May 2021 at the Armenia-Azerbaijan state border was a stark illustration of the need for diplomatic engagement on immediate postconflict issues" the group says. "The escalation came despite Russian-proposed talks to demarcate the border and following shuttle diplomacy by Russian Foreign Minister Sergei Lavrov between the two capitals," it adds.

Meanwhile, "despite plans to complete technical discussions" by March 1 on resuming joint use of regional transit routes, ICG notes that "talks have deadlocked - leading to heated statements threatening renewed fighting in southern Armenia, where a road important to Azerbaijan is located."

ICG concludes that mass displacements from Nagorno-Karabakh, the scramble by military forces to build up new frontline positions, and a looming humanitarian crisis all add up to a "fragile situation" in and around the region.

"Already frictions along the new front line, which lies close to civilian settlements, threaten renewed violence," it says. "The longer it takes for Nagorno-Karabakh residents to return home and resume some semblance of normal life, the harder it will be to jump-start future peace efforts."

Czech hockey legend calls on the foreign ministry to prevent Russian players playing in the NHL opener in Prague.

A recent wave of resignations by medical staff at Slovak health facilities could mean that some of the hospitals are forced to shut down by December.

The head of the National Bank of Ukraine, Kyryl Shevchenko, is under criminal investigation following allegations of fraud, Economic Pravda reported on October 6.