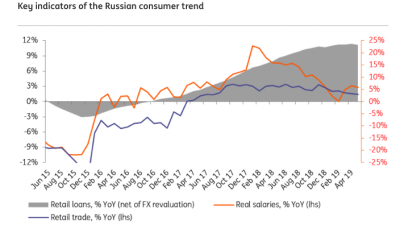 May data on household income and consumption is slightly better than expected although this could be down to one-off factors. Corporate activity is clearly subdued but may see some support from the scheduled pick up in state spending in the second half of the year

Household income and consumption better than expected, but we're still not too optimistic.

The May Russian retail trade growth of 1.4% y/y and a real salary increase of 2.8% y/y are both better than expected. Combined with an upward revision of April data by 0.4 pp and 1.5 pp respectively it may appear as a positive sign. However, we remain cautious for several reasons:

Overall, with a lack of obvious income drivers, likely deceleration in retail lending and limited scope for deceleration in inflation from the current levels, we continue to expect subdued consumption growth this year. 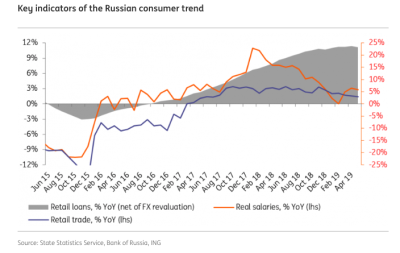 Corporate activity weak, but may recover in 2H19 thanks to budget seasonality

The virtually nonexistent 0.2% y/y growth in construction in May, combined with the 0.9% y/y increase in industrial production (we commented on it earlier this week) and lack of any noticeable acceleration in corporate lending - suggest there's little recovery in the corporate sector from its stasis mode. However, we reiterate there is a hope for some recovery in 1H19, as state spending on direct support to the economy is scheduled to accelerate from -19% y/y in 1Q19 to the drafted +16% y/y for the full year, as the 'National Projects', which are 70% capex, gain traction, and overall budget spending accelerates from 6% y/y in 1Q19 to the 13% y/y drafted for the full-year.

As for the longer-term debate on whether to allow investing part of NWF, the sovereign wealth fund, into the local projects from 2020, the president's position in the debate between Minfin (in favour) and the CBR (concerned) has yet to be clarified. Today's call-in session on the one hand started with highlighting the importance of the National Projects (we believe the idea to invest part of NWF into the local projects is at least partly linked to the search of sources to finance the massive RUB26 trillion programme), but on the other hand there were no clear signs that the president is comfortable with sacrificing the conservative approach to the budget policy. 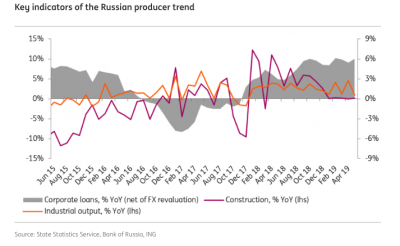 Dmitri Dolgin is the Chief Economist, Russia, at ING in Moscow. This note first appeared on ING’s “Think” portal here.

STOLYPIN: Russia’s opportunistic MENA policy: scavenging, not strategising
Famous ex-defence reporter arrested, accused of treason
US intelligence memo admits there is “no evidence” of Russian payment of bounties to Afghans for killing US soldiers

The re-denomination of the Romanian leu in 2005 had lasting economic and emotional consequences for the population and for domestic and international markets.

One crucial difference between today’s Russia and both the USSR and the US is that it will not – cannot – pay the price of empire, whether in blood or treasure.

Turkey’s credit boom that started towards the end of last year has been turbocharged in recent months and this should provide some welcome support to the economy as it emerges from the coronavirus crisis. But will it go too far?

Uzbekistan’s inaugural $1bn Eurobond in February of last year was hailed as a landmark event for Uzbekistan. Now its on the map for international creditors, the government need to avoid a borrowing binge that will end in a debt trap.