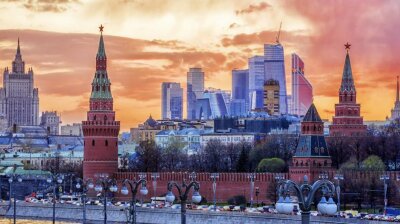 Russia ended 2020 with a modest budget deficit of 3.8%, which was still the highest in years. And the budget is expected to stay in deficit for the next two years
By Dmitry Dolgin chief economist Russia at ING in Moscow January 27, 2021

In 2020, Russia managed to limit the federal deficit at 3.8% of GDP, thanks to better-than-expected revenue collection, one-off proceeds of 1.0% of GDP and a persistent spending backlog of 1.0% of GDP. The latter might be powered through in 2021, most likely in favour of social support ahead of the parliamentary elections.

The Russian Finance Ministry reported its preliminary estimate of the federal budget deficit for 2020 at RUB4.1 trillion ($54.7bn), or 3.8% GDP, which is smaller than the RUB4.6 trillion (4.2% of GDP) deficit we anticipated due to better-than-expected revenue collection and lower-than-expected spending. Here are the key observations and takeaways:

The 5.6 percentage point deterioration of the federal budget balance from a 1.8% GDP surplus in 2019 to a 3.8% GDP deficit in 2020 has been limited both on the expenditure and revenue sides. First, federal spending went up by 4.8ppt of GDP (with two-thirds of the sum targeted toward social support, healthcare and transfers to the regional budgets), but the 1.0% GDP spending backlog (80% of it, represented by spending allocations for the functioning of the government, police, military and direct support to industries) accumulated from the previous years, remained unchanged. Second, non-fuel revenues, despite the likely 3% GDP drop, remained flat in nominal terms and increased by 0.5ppt in real terms. The revenue side was also supported by 1.0% GDP one-off proceeds from the Sberbank equity stake transaction.

Only the fuel revenue side showed a 2.3ppt deterioration amid the $23/bbl drop in average Urals price and a decline in output volumes. Annual fuel revenues per $1 per barrel of Urals price dropped from $1.9bn in 2019 to $1.7bn in 2020, their lowest level since 2016.

The budget breakeven oil price went up from $48/bbl in 2019 to $74/bbl, also a post-2016 high, but still slightly lower than the $80/bbl level we anticipated. The spike is driven purely by the increase in expenditure and is the primary reason why the MinFin is guiding for consolidation in 2021-23. We maintain that the weak household income trend and accelerating CPI ahead of September's Parliamentary elections may become a strong argument in favour of powering through the 1.0% GDP spending backlog and redistributing it in favour of social and regional support. This would allow the avoidance of a 6% nominal cut in federal expenditures drafted for 2021, while not requiring additional borrowing (we understand that the funds allocated for the backlog are saved on the Treasury accounts).

Financing of the deficit in 2020 relied heavily on local borrowing, which totalled net RUB4.6 trillion (exceeding the headline deficit). This has increased the dependence of the local money market on the Minfin's liquidity provision instruments. As of the end of November last year, local banks' liabilities to the Minfin through deposits and repo operations stood at RUB6.2 trillion, being up RUB0.6 trillion year on year. However, in December 2020 and January 2021, the Minfin has apparently reduced its liquidity provision by at least RUB1.5 trillion, putting pressure on the money market. This year's net debt placement programme of RUB2.7 trillion does not exceed the expected deficit, and we do not exclude that amid the suspended fiscal rule it might be further reduced, depending on the market appetite for state local bonds and Urals price performance. The total public debt is likely to stabilise around the 20-21% GDP level, which is still low by global standards.

The official budget for 2021 is drafted under an assumption of $45.3/bbl average Urals price, which suggests some room for outperformance. Under ING's house view, we see around RUB0.8 trillion of extra fuel revenues this year being deposited in the sovereign wealth fund (National Wealth Fund) or partially used to finance current spending amid the suspended fiscal rule.

Assuming the likely outperformance of both Urals price and spending volumes vs. the official draft, we expect a 1.8-2.0% GDP (RUB2.1-2.3 trillion) deficit this year, with borrowing volumes not exceeding these amounts. To remind, the regional budget balance will be another factor to watch starting this year, given the possibility of lower dependence on federal transfers in financing the deficits.

COMMENT: OPEC+ puts off production cut decision for a month

COMMENT: OPEC+ puts off production cut decision for a month

A decision over oil production levels and prices looks to have been delayed for a month following the OPEC+ meeting, between OPEC’s 13 members and 10 other non-OPEC countries, on March 4.

COMMENT: Uzbek privatisation - this time it seems to be for real

Privatisation efforts in Uzbekistan are moving to a practical level. The newly appointed State Asset Management Agency head has started to implement the presidential decree on privatisation with a new zeal.

It has been an exceptional month for commodity markets, with growing inflation expectations increasing investor interest in the assets. Meanwhile, fundamental developments, particularly in the oil market, have only provided a further boost.

FPRI BMB Ukraine: The US takes on Kolomoisky

On March 5, the US State Department issued a public designation of Ukrainian oligarch Ihor Kolomoisky for his involvement in “significant corruption,” and banned both him and his immediate family from entering the United States.

COMMENT: OPEC+ puts off production cut decision for a month
1 day ago
COMMENT: Uzbek privatisation - this time it seems to be for real
1 day ago
ING: Commodity supercycle calls grow
1 day ago
FPRI BMB Ukraine: The US takes on Kolomoisky
2 days ago
ING: Turkey’s inflation remains on an upward path
4 days ago