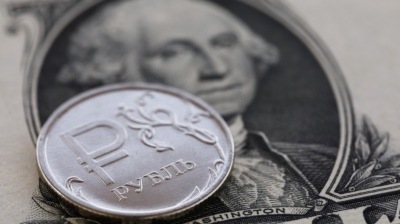 The $9/bbl upgrade in ING’s 2021 oil price forecast boosts Russia's annual exports by $25bn. But it will be sterilised by an additional $15bn of FX purchases leaving a small impact on exchange rates.
By Dmitry Dolgin chief economist Russia at ING in Moscow March 4, 2021

The $9 per barrel upgrade in ING’s 2021 oil price forecast boosts Russia's annual exports by $25bn. But it will be sterilised by an additional $15bn of FX purchases and elevated capital outflows on local and foreign challenges. We see no reason to improve our $/RUB forecast of 72-73 for 1H21, though stronger financial stability is somewhat reassuring.

A higher oil price benefits the budget, not the FX market. The Russian Finance Ministry announced an increase in monthly FX purchases from $0.6bn in February to $2.0bn in March (Figure 1), which is higher than the $1.6bn Reuters consensus and slightly higher than our expectations.

The hike in the fiscal rule FX purchases, which will be conducted by the Central Bank of Russia (CBR) on the market, reflects a material $7/bbl increase in the average monthly oil price in February and the upward revision to last month's oil revenues of the budget. We positively take the fact that the budget is almost fully benefiting from the high oil price environment despite the earlier warnings of reduced oil exports in February.

At the same time, the March FX intervention announcement is generally in line with our take on the relative neutrality of oil prices for the ruble's performance. Year to date, the ruble is up just 1% against the US dollar despite a 21% increase in the oil price.

Following the robust performance of the commodity markets, ING has upgraded its oil price forecast for 2021 by around $9/bbl, which corresponds to our Urals price assumption of $63/bbl vs. the previous call of $54/bbl. According to our calculations, that means a material $25bn increase in the annual current account forecast to $70bn for 2021.

Meanwhile, the budget will be the key beneficiary of this increase, as more than half of the extra current account ($15bn) will be sterilised by the FX purchases under the fiscal rule, as we now see annual FX interventions at $25bn this year vs. previous expectations of $10bn. The remaining $10bn of extra current account is subject to risks of elevated private capital outflows, as suggested by the disappointing January data.

While failing to have a direct positive effect on the ruble, it may help to insulate it from additional external volatility through reinforced macro stability perceptions. The total foreign debt of 32% of GDP, public debt of under 20% of GDP, liquid FX savings in the sovereign fund at 8% of GDP, expected current account surplus of 4.5% of GDP combined with FX underperformance in 2H20 (Figure 2) should make the ruble less vulnerable to global volatility associated with the US Treasury sell-off than most of its emerging market peers. 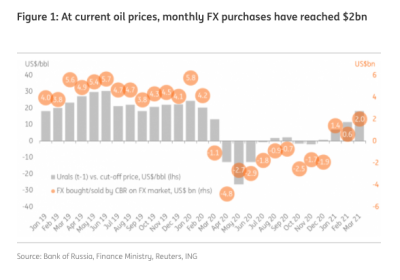 At the same time, higher oil prices are unlikely to insulate the ruble from the pre-existing Russia-specific challenges, including foreign policy uncertainty (the recent restrained US sanctions were a relief but the risk of further tightening has not been removed) and private capital outflows stemming from low local confidence.

A cautiously constructive view on the ruble is maintained, but risks of volatility are high. The high oil price environment is unable to directly translate into a stronger ruble, but it helps to boost Russia's macro stability advantage relative to its EM peers, potentially limiting the negative impact of the recent volatility on the global bond markets.

We therefore maintain our cautiously constructive expectations of $/RUB73.0 by the end of 1Q21 and 72.0 by mid-year. Meanwhile, Russia-specific challenges to the capital account, including persistent foreign policy uncertainty and low local confidence, remain a risk factor, potentially challenging the year-end target of 73 and causing the ruble to trade in a wide range throughout the year. The February balance of payments data, to be released on 10 March, will be the next important data point in assessing the prospects of capital outflows. 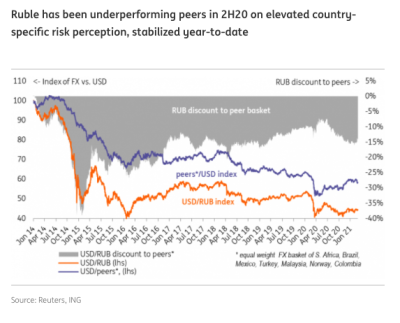 COMMENT: Strengthening the foundation of the Uzbek capital markets infrastructure

After sitting moribund for two and half decades, Uzbek president Shavkat Mirziyoyev has just launched a major reform of the Uzbek capital markets that could transform financing in the republic.

The US took a mild path for the time being with the new sanctions on Russia’s debt. Sanctioning the primary market activity of OFZs for US entities has little impact on Russia and international financial markets.

For financial market investors, Russia is currently in the same basket as Turkey and Ukraine, but only on a temporary basis.

TRENIN: Russia-Ukraine war alert – what’s behind it and what lies ahead?

Perhaps the most important thing for the Russian leadership in this episode was to prevent the need to actually go to war against Ukraine in the future. Going for overkill in terms of military manoeuvres now prevents actual war later.

BORDERLEX: EU Commission goes back to the drawing board to revive Turkey trade talks
7 hours ago
COMMENT: Strengthening the foundation of the Uzbek capital markets infrastructure
15 hours ago
COMMENT: Fresh US sanctions and OFZ primary market ban a global non-event, but sanctions possibly now entrenched quasi indefinitely
3 days ago
MITTELEUROPEAN INSIGHTS: Russian 'sanctions bubble' vs Ukrainian and Turkish fundamentals
4 days ago
TRENIN: Russia-Ukraine war alert – what’s behind it and what lies ahead?
5 days ago