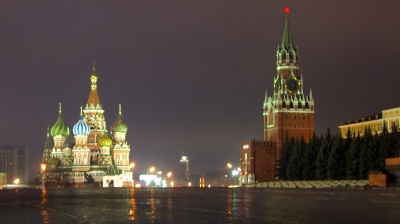 Russian banks and other corporates reduced foreign debt by $11bn in 3Q20
By Dmitry Dolgin chief economist Russia at ING in Moscow October 14, 2020

Russian banks and other corporates reduced foreign debt by $11bn in 3Q20 after a similar spike in 2Q20. The swings here could be technical, but the 3Q20 drop confirms that the private capital outflow unrelated to foreign debt seems to have stabilised. This is a promising future sign for the balance of payments.

Nominal corporate foreign debt (of banks and non-financial companies) dropped by $17bn in 3Q20 to $388bn as of the end of 3Q20. However, as up to 45% of the corporate debt is denominated in € and RUB, a significant portion of the 3Q20 nominal growth reflects paper decline due to the quarterly depreciation of $RUB from 70.4 to 78.8, partially mitigated by the appreciation of EUR$ from $1.12 to $1.17. Adjusted for this effect, the actual decline in corporate foreign debt was around $11bn, in our estimates.

This $11bn decline mirrors the similar increase for 2Q20, which we now estimate at $10bn (higher than our initial $7bn assessment) following a CBR update on the foreign debt currency structure. The swings in foreign debt between 2Q and 3Q seem to be in line with seasonality, but the size of the quarterly moves appears quite large. Remember, corporate foreign debt has remained stable since 2019 after the sanction-driven net redemption we saw in 2014-18.

As for the foreign debt structure, the fluctuations in the last two quarters are driven not by core items, such as debt to direct investors, loans and deposits, debt securities, trade finance, or leasing, but rather by the non-transparent 'other' item.

Looking at the broader balance of payments, these flows are counterbalanced by swings in outward trade finance and advances.

This suggests that the recent swings in foreign debt are more likely to reflect technical intra-group corporate transactions rather than market activity. On the macro level, the persistent sanction environment for the key publicly traded corporates, and lack of investment demand, are favouring stable foreign debt.

In other words, the foreign asset accumulation, which we attribute to low local trust, seems to have stabilised, which is a promising sign for the balance of payments. Assuming trends observed in 3Q20 continue until the end of the year, we expect to see net private capital inflow in 4Q20 of around $5bn after four consecutive quarters of outflows. The drop in the corporate foreign debt fully explains the net private capital outflow in 3Q20 and suggests that other components of the capital account (mainly accumulation of foreign assets) have stabilised. This a positive sign for the balance of payments, suggesting fundamental support to the ruble from local players. Meanwhile, remember that RUB's vulnerability to foreign portfolio flows (driven by both EM risk appetite and Russia's country-specific risks) remains a factor of uncertainty for the FX market, especially in the next three to four weeks.

Dmitri Dolgin is the Chief Economist, Russia, at ING in Moscow. This note first appeared on ING’s “Think” portal here. 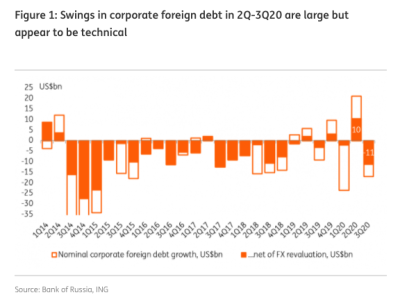 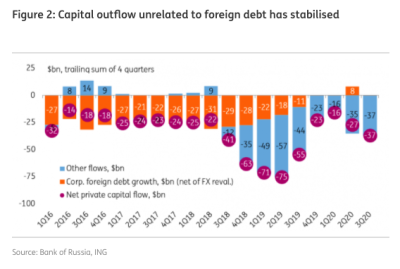 It's the anniversary of Operation Barbarossa on June 22, when Hitler launched his surprise invasion of the Soviet Union, completely catching Stalin unawares. The ultimate victory over the Nazis has become a centre-piece of Putin's Russia.

The Ryanair incident on 23 May was as much a bellwether for the status quo in Belarus as it is a geopolitical catalyst.

The price faced by Russia for aggression must be too high for the Kremlin to countenance, and this is the message that Biden should deliver to Putin – and act upon.

COMMENT: CEE national recovery and resilience plans – the focus, the gaps and what comes next

Most CEE governments submitted their national plans after the deadline and two (Bulgaria and Estonia) are yet to finalise them.

The governing United Russia Party held its “primaries” in the last week of May. The votes were tallied and a party congress will, on June 19, approve a list of candidates for the September Duma elections.

RIMMER: Unhappy anniversary: Operation Barbarossa
5 hours ago
THE VIEW FROM MITTELEUROPA: Surviving on life support – Belarus, sanctions and path-dependency
1 day ago
COMMENT: Time to end Putin's impunity
4 days ago
COMMENT: CEE national recovery and resilience plans – the focus, the gaps and what comes next
5 days ago
MOSCOW BLOG: Primary rehearsal
8 days ago