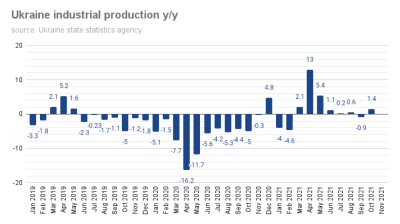 After a hiccup in September, industrial production in October returned to growth with all sectors expanding.
By Cameron Jones in Kyiv November 25, 2021

The authority said that, adjusted for the effect of calendar days, industrial production in October 2021 against October 2020 rose even more – by 2.2% versus a decline of 0.9% a month earlier.

According to statistics, the increase in production was recorded in all sectors: in the extractive industry – by 0.6%; in the processing industry – by 0.4%; but the largest contribution came from the supply of electricity, gas, steam and conditioned air – 7.6%.

The State Statistics Service said that compared with September this year, industrial production in the country increased 7.8%, and taking into account the seasonal adjustment it grew by 1.9%.

Thanks to such indicators, in January-October of this year, the growth of industrial output year on year remained at the level of 1.4%, including 1.1% in the extractive industry, 1.5% in processing, and 1.7% in the supply of electricity, gas, steam and conditioned air.

The latest poll of CFA Society Romania members in December revealed a slightly more optimistic sentiment than in the previous month.

Central bank says spread of Omicron variant has only had a small impact on the economy.

Poland’s Q4 economic growth poised to be strongest in region