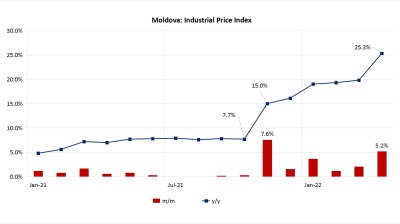 Industrial, or factory-gate, prices in Moldova increased by 5.2% in April, compared to March, pushing up the industrial price inflation to 25.3% y/y, the statistics bureau BNS announced.

Prices of intermediary goods sold on the local market soared by 11% m/m in April, creating expectations for a further advance in the overall industrial production index.

The consumer price inflation already exceeded 27% in Moldova and further electricity price hikes are expected. A one-month contract with the power plant in the separatist Transnistria region allowed the authorities to defer this at a time when inflation has already hit households’ budgets.

Households are charged for natural gas a price that does not reflect the (higher) import price, but further hikes in this regard are not imminent since consumption is low and the import price is expected to decrease during the wintertime.

The industrial price inflation in April was the second-highest since last November when Gazprom began charging much higher prices under a new contract and Moldovagaz had to hike the prices for both residential and industrial consumers.

The price of electricity and natural gas paid by Moldovan companies has more than doubled y/y (+113%), expressed in local currency, but increased by only 2.5% in April compared to March.

The prices of non-durable consumer goods sold on the local market, in contrast, surged by 7.9% m/m in April.

HESS: West wins the default battle, but the economic war must go on

NEMETHY: Is the US Fed playing with the wrong levers?

HESS: West wins the default battle, but the economic war must go on
NEMETHY: Is the US Fed playing with the wrong levers?
Sky-high inflation forces more Russians to take out “pay-day” loans

Hungary’s jobless rate inches down to 3.5% in May

Hungary's jobless rate would be closer to 5% if workers in public work schemes were included.

Polish retail sales growth eases to 8.2% y/y in May

Consumption trends are normalising after disruption caused by the inflow of Ukrainian refugees and the low base effect from last year.

Russia’s ruble jumped 6% against the euro on June 21 to a seven-year high, making it the best performing currency in the world.

Polish PPI inflation accelerates to 24.7% y/y in May

The index grew sharply due to expensive energy commodities and industrial metals, their prices driven up by the war in Ukraine.

Poland’s unemployment rate falls to lowest point since 1990
1 day ago
Hungary’s jobless rate inches down to 3.5% in May
3 days ago
Polish retail sales growth eases to 8.2% y/y in May
4 days ago
Ruble rises to seven-year high, best performing currency in the world
5 days ago
Polish PPI inflation accelerates to 24.7% y/y in May
5 days ago