IMF: How food and energy are driving the global inflation surge 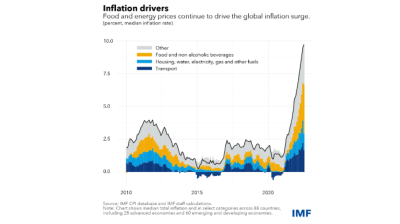 Inflation already began to rise during the coronavirus pandemic, but the showdown between the West and Russia and the related energy crisis has pushed rates higher in 18 months than in the last five years combined. / bne IntelliNews
By Philip Barrett economist for the IMF September 11, 2022

Global inflation was generally moderating when the pandemic began, and the downward trend continued into the early months of the crisis. But surging prices since late 2020 have pushed inflation steadily higher. The average global cost of living has risen more in the 18 months since the start of 2021 than it did during the preceding five years combined.

Food and energy are the main drivers of this inflation, as our Chart of the Week shows. Indeed, since the start of last year, the average contributions just from food exceed the overall average rate of inflation during 2016-2020. In other words, food inflation alone has eroded global living standards at the same rate as inflation of all consumption did in the five years immediately before the pandemic. A similar story holds for energy costs, which show up both directly and indirectly, through higher transportation costs. This is not to say that prices of other items are not rising too. For example, services inflation has increased in the United States and the euro area. And the relative impact of food, energy and other items in driving inflation varies considerably across countries.

Inflation continued to climb throughout July, albeit a little more slowly. Though circumstances vary by country, the latest observations show a slight change in the composition of inflation, with food’s share increasing further while energy-related categories eased slightly. This is consistent with the possibility that global energy prices have been passed on to consumers more quickly than higher wholesale food prices.

Our latest World Economic Outlook in July projected inflation to reach 6.6% this year in advanced economies and 9.5% in emerging market and developing economies – upward revisions of 0.9 and 0.8 percentage points respectively from three months earlier. Next year, interest-rate hikes are likely to bite, with the global economy expanding by just 2.9% and in turn slowing price increases worldwide.

With rising prices continuing to squeeze living standards worldwide, taming inflation should be the priority for policymakers. Tighter monetary policy will inevitably have real economic costs, but these will only be exacerbated by delaying corrective action. As a recent Chart of the Week shows, central banks have dramatically pivoted this year toward tighter policy globally.

Targeted fiscal support can help cushion the impact on the most vulnerable. Policies to address specific impacts on energy and food prices should focus on those most affected without distorting prices. And with government budgets stretched by the pandemic, such policies will need to be offset by increased taxes or lower government spending.

This article first appeared as an IMF blog here.

Philip Barrett is an economist in the IMF’s Research Department. Since joining the IMF in 2016 he has worked in the Fiscal Affairs Department and the Middle East and Central Asia Department, covering Afghanistan and Iran. His research interests include fiscal policy, social unrest, and climate change. He holds a PhD from the University of Chicago.

RBI's 2022 profits soar to €3.6bn, with Russian operations representing more than half
bneGREEN: Most growth in power generation by 2050 will be solar and wind – BP
Russian gas pipe flow dips to record low in January

PANNIER: Uzbeks, Kyrgyz cooperating to level unthinkable 10 years ago
4 days ago
PANNIER: A very Turkmen coup
8 days ago
OPINION: Bulgaria sets itself a tough task with Burgas-Alexandroupolis pipeline revival
11 days ago
NEMETHY: Is Ukraine War the beginning of World War III?
11 days ago
RIDDLE: The Russian army in 2023
12 days ago