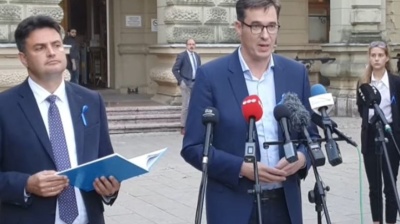 Budapest Mayor Gergely Karacsony (right) is to step down as candidate for premier in favour of Peter Marki-Zay (left) in the runoff to the primary to select a joint candidate of the opposition.
By bne IntelliNews October 8, 2021

After losing out in the first round of the primaries to frontrunner Klara Dobrev, Budapest’s liberal mayor Gergely Karacsony has announced his withdrawal from the race to support outsider, conservative small-town mayor Peter Marki-Zay on October 8, according to local media.

Hungary’s primary election is becoming a thriller just two days before the runoff kicks off on Sunday.

The number two and number three candidates are joining forces against Dobrev after a week of political wrangling and behind-the-door consultations that fuelled some mistrust among parties and voters.

The 49-year conservative politician spearheaded a campaign to unify the opposition parties against Dobrev. Marki-Zay argues that even as opposition parties have made the historic decision to run on a joint ticket against the ruling nationalist Fidesz party, they have little chance of unseating Viktor Orban with the wife of former Prime Minister Ferenc Gyurcsany running as prime minister candidate.

Gyurcsany remains a highly divisive figure in Hungarian politics for his role in cracking down on protesters in the autumn of 2006 and for what is regarded as the mismanagement of the economy before the economic crisis.

Consultations between Marki-Zay and Karacsony on which one of them should step back had previously  yielded no results. They planned to run on a joint ballot but the independent committee overseeing the primaries called that against the rules.

Marki-Zay, who catapulted to Hungarian politics in 2018 after a stunning upset victory in a by-election, beating former cabinet chief Janos Lazar in Hodmezovasarhely (southern Hungary), has been the outsider with no party behind him and operating with a small budget.

According to his own account he has spent just HUF20mn (€55mn) on his campaign, compared to Karacsony, whose budget was HUF500mn.

The balance of power seems to have shifted to his side on Wednesday after a number of polls were published. Marki-Zay said the polls showed that he has more chance of beating Klara Dobrev and his disapproval rating is the lowest, making him the candidate most likely to beat Viktor Orban, who has tightened his power in 2018 after two supermajority wins.

Marki-Zay's bid to become the opposition’s joint candidate got a boost on Thursday, after the liberal Momentum party officially announced it would stand behind him in the runoff. President Andras Fekete-Gyor finished dead last in the prime ministerial primaries with only 4% of the votes.

At a joint press briefing with Momentum in front of parliament the conservative leader said the time had come for a change of government. He maintained that he could be a bridge to unite the left and right and he has the biggest chance to convince undecided and disenfranchised Fidesz voters to support the joint opposition.

Hungarian opposition parties have concluded the first round in the historic primary election last month, selecting candidates to run in 106 districts. The runoff will decide who will face off Vikor Orban in the high-stake election.

Karacsony discussed his option with parties supporting him, including his own Dialogue party, green LMP and the Socialist party (MZSP) on Thursday.

Centre-right Jobbik leaders said they will leave it up to voters which candidate to support in the runoff.

Polls show that Klara Dobrev could become Hungary’s first female candidate if it remains a three-person race, but the race could be a cliffhanger if she is running against one challenger.

The second round of voting online and in-person will last between October 10 and 16.