Hungary’s jobless rate inches down to 3.5% in May 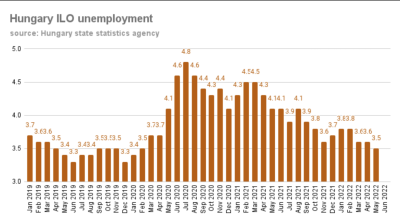 The KSH noted that data from the National Employment Service (NFSZ) show there were 234,000 registered jobseekers at the end of May, down 14.7% y/y.

The number of employed rose at a faster pace than the decline in the number of jobless. At the end of May, there were 4.69mn employed, 99,000 more than a year earlier, including 87,000 in the primary job market.

The job market is close to full employment and the number of employed is rising at a slow rate relative to the number of unfilled positions, indicating the low quality of the labour pool and skill and geographical mismatches, according to Magyar Bankholding, which put the full-year jobless rate at 3.1%

Hungary’s tight labour market and lack of available workforce are driving up wages, adding to inflationary pressures. On the other hand, strong wage outflow is keeping aggregate demand in the economy high, lending support to economic growth, ING Bank said.

Romania’s public debt reached €124.3bn at the end of May after the government raised €1.75bn in the month with its third series of Eurobonds this year.

Romania’s public debt hits 50% of GDP at end-May
17 hours ago
Hungary's automotive industry continues to rebound in June
1 day ago
Russian GDP contracted by 4% y/y in the second quarter of 2022
1 day ago
Serbia’s annual inflation accelerates further to 12.8% in July
2 days ago
Poland’s CPI growth rate picks up just 0.1pp to 15.6% y/y in July
4 days ago