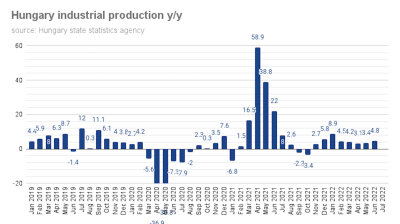 The output of the automotive industry, Hungary's biggest manufacturing sector, rose 2.9% y/y in June, continuing to rebound after a period of contraction, a detailed release of data by the Central Statistics Office (KSH) on August 12.

KSH confirmed that headline industrial output increased by 4.8% in June from 3.4% in the previous month (chart) and unadjusted output rose 1.5%, slowing from 9.4% in May, when there were two more workdays than in the base period. On a monthly basis, output rose a seasonally- and workday-adjusted 0.6%.

Industrial production returned to levels seen at the beginning of the year, which suggests that manufacturers managed to bridge supply disruptions caused by the war, ING Bank Péter Virovácz said. ING Bank is less optimistic about the outlook in the industry and the economy as a whole, as there are clearly signs of weakening economic activity. The soft landing has already started, it added.

Output has slowed slightly in the second quarter, after expanding in the first quarter, and was virtually stagnant compared to the previous quarter, Magyar Bankholding analyst Gergely Suppan said. The economy could benefit significantly in the medium term from automotive investments and the build-up of defence industrial capacities, he added.