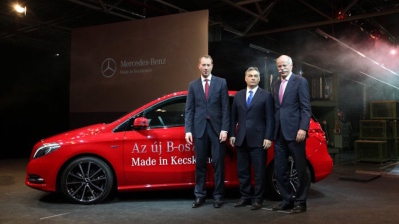 Daimler Chairman Dieter Zetsche (right) and Prime Minister Viktor Orban (centre) at the launch of the Kecskemet plant in 2012.
By bne IntelliNews January 20, 2021

Mercedes-Benz Manufacturing Hungary will halt production at its Hungary factory for 10 days starting from Wednesday due to the global shortage of computer chips, the company announced on January 19.

The shutdown comes just three days after production resumed at the Kecskemet plant after a month-long winter halt.  Daimler also shut down production in Hungary in the spring for a month due to the pandemic.

The company established its Hungarian plant in 2012 with a €800mn investment, which was the largest greenfield investment at the time. The plant is operating with 4,700 workers and has produced more than 1mn cars since, including 190,000 in 2019.

Daimler is not the only Hungarian carmaker affected by the supply chain shortage. Audi Hungaria will cut production to one shift starting this week. The temporary shift reductions could affect all plants, but Audi parent Volkswagen is working hard to resolve the issue as soon as possible, the company’s communications director told Hungarian media.

The third major carmaker in Hungary Suzuki reported no disruptions in production. The Japanese carmaker, which has a manufacturing base in Esztergom, is working with its suppliers to keep production continuous, the business daily writes. Due to the pandemic, car parts suppliers, including chipmakers, switched from the car industry to meet strong demand from the consumer electronics sector.

The upswing in demand for vehicles in the fourth quarter has boosted production but as carmakers operate in just-time manufacturing mode, they had run out of stocks. The shortage of computer chips has led to disruptions at all major global carmakers.

The shutdown is bad news for the economy as the automotive industry is a major engine of the economy. The sector accounts for 5% of GDP, a fifth of all exports, and one-third of total industrial output.

Thanks to significant capacity-building investments in recent years, the vehicle sector and connected sub-sectors have nearly doubled their performance since 2010, with a production value of HUF10 trillion.

Hungarian Q4 growth in GDP revised up to 1.4%

Hungary’s Fidesz pulls out of EPP before it is expelled
Hungarian Q4 growth in GDP revised up to 1.4%
Erste Bank net profit halves to €783mn in 2020

The online food retailer entered the Hungarian market in 2019, Austria in December, and plans to launch online sales in Germany in the next few months.

Prime Minister Igor Matovic has come under fire for his erratic style of leadership, which has become particularly evident during the government's poor handling of the COVID-19 pandemic.

Viktor Orban's withdrawal will leave him in no-man's land and significantly reduce his influence. It could also make it easier for the EU to punish Orban for dismantling Hungary's democracy.

Bucharest has already scrapped a deal with China's CGN to expand its nuclear power plant and agreed with the US to exclude "unsafe" companies from 5G auctions.