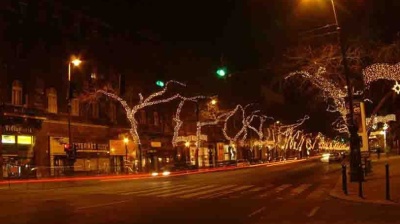 Some Hungarian town leaders turned off their festive holiday lights after 7 pm on December 23 in protest at the cuts in their budgets.
By bne IntelliNews January 4, 2021

Leaders of Hungarian local governments led by opposition parties have called for the withdrawal of a government decree that will take billions of forints of revenue out of their pocket at a critical time.

Just a couple of days before Christmas, Prime Minister Viktor Orban announced that in 2021 SMEs will have to pay only 50% of the local business tax (IPA) to local governments. In protest, city and town leaders turned off their festive holiday lights after 7 pm on December 23 in order to call people’s attention to the importance of public services offered by the councils. The revenue-based tax is a major source of revenue for municipalities, which are in the front line of the pandemic. They are already being squeezed by funding cuts and a fall in revenue.

The halving of local business tax follows a string of other measures that are suffocating local governments, leaders said, and could lead to bankruptcies. The government redirected funds from them to the so-called Pandemic Defence Fund in the spring, and they lost money with a national decree that made parking free from November 11. The solidarity contribution was hiked, and they lost the right to collect car tax revenues.

In our 2021 economic and political outlook bne IntelliNews highlighted that one of the major political controversies of 2021 will be the escalation of conflict between the Orban government and local municipalities, especially those led by opposition parties. The 2019 local elections stunned Fidesz, with the opposition making a breakthrough in a dozen large cities, including Budapest. The opposition now says that the cabinet is taking revenge by financially bleeding the cities.

The latest decree stipulates that municipalities with fewer than 25,000 will be automatically compensated for lost revenues, while larger cities will have to negotiate with the government individually.

Budapest and other city leaders have received the first taste of what to expect from the cabinet. In a decree published in the official gazette on December 24, a dozen cities led by Fidesz were granted on average HUF1.4bn (€3.8mn) in compensation, while opposition-led municipalities only 30-50% of that sum, which will only be available for specific projects.

In October, the chairman of the Chamber of Industry and Commerce, an Orban ally, came up with the proposal of phasing out IPA payments for all companies for a year, in addition to reducing temporarily the corporate tax rate from 9% to 5%.

The plan drew immediate uproar, even from ranks in the ruling conservative party. It seems that these objections were quickly quelled with the targeted compensation scheme.

ING: Bad signs in the Hungarian job market
European Commission hopes to use new rule of law tool this year
Emerging Europe strong on women’s economic opportunities but dragged down by low pensions