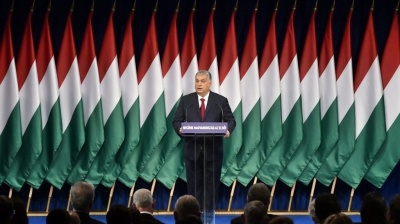 Preserving jobs will remain the most important task in 2020 and beyond as the Eurozone’s economy has stalled, Hungarian Prime Minister Viktor Orban said in his state of the nation address on February 16.

The annual address is where Orban sets out his vision for Hungary and overarching policy priorities. Last year, he unveiled a string of family support measures, which marked the start of his campaign rally for the 2019 European Parliamentary elections.

This time, in his 22nd annual speech, the prime minister looked back on the last ten years of his government as the most successful ten years for Hungary in the last century.

"Hungary is still here 100 years after the Trianon Peace Treaty, which formally ended the First World War and set the new borders," he said. The country retained just 28% of the 325 square kilometres of land that had constituted the pre-war Kingdom of Hungary and only 36% of the population. Trianon remains a deep wound for most Hungarians.

Orban said Hungary was now finding common ground with its neighbours and was in a position to engage in broad cooperation and form alliances with them. The PM is in a delicate position, as he needs to please hardline nationalists and build up cooperation with his Visegrad Four partners and neighbours Romania and Serbia at the same time.

Orban listed the economic successes of the past decade, when his government took over a bankrupt country. We have "sent the IMF home, managed to pay back the loans early, created 850,000 jobs, put the country’s finances in order and launched schemes to help a reunification of the nation".

Investments in Hungary and exports both hit record highs last year, he said, noting that Hungary ranks 94th in the world in population size and 34th in terms of its export volume. As in previous years Orban targeted Eurosceptic voters by lashing out at the Brussels elite. "Over the past ten years we also learned that Europe is not in Brussels, Europe is us, and we don’t have to please the tired Brussels elites," he said.

Orban gave an overview of the family protection measures announced a year earlier. More than 100,000 families have subscribed to the general purpose interest-free baby support loan since July, which lifted banks’ lending stock by HUF460bn (€1.4bn), 20% of the total HUF2.4 trillion in new retail outlays in 2019. Last year the government gave lifelong exemptions to mothers with at least four children from the personal income tax and gave HUF2.5mn subsidies for the purchase of seven-seat cars for larger families.

Speaking about the future, he said his government would like to expand these measures but that will depend on financing.

Orban said serious steps needed to be taken to maintain the achievements of the last ten years because “a climate crisis is looming, the population is declining and dark shadows are hanging over Europe’s economy”.

"Europe’s economy has stalled which means that their problem is our problem as 85% of Hungary’s exports go to the EU27. Hungary must focus its efforts in 2020 and in the years to come on retaining jobs," said the prime minister. Orban pledged to cut payroll taxes and taxes on small businesses.

The Hungarian PM unveiled detailed climate protection plans, saying fighting climate change is a patriotic task of a Christian democratic government. This may have been the most surprising element of Orban’s speech.

Detailing the plan, the prime minister said that as of July 1, the government will start eliminating illegal waste sites and penalising polluters. Single-use plastics will be banned and a deposit return scheme will be introduced for glass, plastic bottles and cans. The government will also introduce stricter regulations for multinational companies, mandating the use of environmentally-friendly technologies. Further, the government will allocate HUF32bn towards supporting renewable energy production by small and medium-sized enterprises (SMEs). Hungary will increase the capacity of solar power plants six-fold and by 2022 new buses in public transport will all be electric, Orban said.

A so-called green government bond will be introduced, with the government vowing to spend all returns from the bonds on climate-friendly schemes, the prime minister said. At present 60% of Hungarian electricity generation is carbon-neutral and the government is striving to increase that ratio to 90% by 2030 relying on nuclear and solar power, according to the country's new energy strategy released last month.

The government announced last week that it will initiate a new round of national consultation, questionnaires sent out to households to measure public opinion, but this serves to set the political agenda and is simple propaganda, critics say.

The new consultation would address several topics including the so-called "prison business", the proposed tightening of conditions for parole, and restitution payments for Roma victims of school segregation. Orban has refused to pay compensation to them but also confronted EU court rulings to pay compensation to prisoners. Analysts say Fidesz is trying to lure back disillusioned right-wing voters after an unexpected setback at the local government elections in October.

"They mock justice, the life instincts of honest people and are ready to defend perpetrators instead of victims," he said referring to the term "prison business", a phrase coined by Fidesz communication spin doctors and echoed by propaganda media. The prime minister said foreign-funded organisations backed by US financier George Soros "and their hired lawyers are filing a myriad of lawsuits, abusing the protection of rights".

He also made sarcastic comments making fun of the diversity of the opposition, but his political opponents got last laugh of the day. The joint candidate of the opposition won Sunday's parliamentary by-election against an independent backed by the ruling Fidesz party by a landslide in blue-collar town, Dunaujvaros, with a population of 44,000, albeit with a low turnout. The election was seen as a litmus test for the viability of the strategy followed by opposition parties to field a single candidate against Fidesz.

ING: Negative growth for Central and Eastern Europe with more easing ahead

Hungary under fire over legislation that gives sweeping powers to government

ING: Negative growth for Central and Eastern Europe with more easing ahead
Hungary under fire over legislation that gives sweeping powers to government
Balkans have some of the world’s strictest anti-coronavirus measures