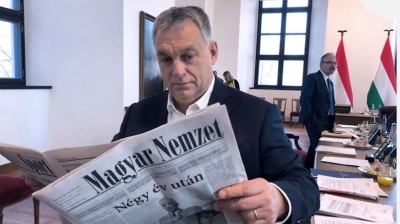 Prime Minister Viktor Orban has openly endorsed Donald Trump in a two-page essay published in a pro-government daily, while reiterating his long-standing views of the clash between Christian-conservatives and liberals and accusing the global elite, including Hungarian born billionaire George Soros, of interfering ahead of Hungary's elections in 2022.

In the op-ed which appeared in Magyar Nemzet, Orban uses the world liberal 33 times and on four occasions in a derogatory form, "libernyak". The word is a slur describing people who hold liberal views. A renowned linguist said the expression is plain gutter language, which also has extreme right-wing connotations.

Another characteristic of his essay is that it is abundant in military expressions, such as fighting, war or battlefield. Analysts say this is not surprising as Orban has often used this terminology in the past in reference to the West and the EU, or when talking about elections to mobilise his supporters.

Independent media also pointed out that the prime minister wanted to divert attention from the pandemic and its economic fallout to focus on ideological issues instead, messages targeted at his eurosceptic core base.

In the essay Orban said the basic tenets of Christian democratic and liberal thinking are "diametrically opposed to each other", explaining that Christian democrats reject liberals' beliefs that every country must be forced to accept liberal democracy as their form of government, that "it is best to cede our national governments' powers to international organisations".

The Hungarian prime minister has long pitted Hungary and Central Europe as defenders of conservative and Christian values against the liberal West, which in his view has lost its vitality and zeal and openly promotes same-sex marriage and mass migration.

For Orban and his conservative base, Brussels and Europe's bureaucratic elite have been a punchbag, even though Hungary has been one of the biggest beneficiaries of EU transfers since joining the bloc in 2004.

Politically Orban's efforts to focus on ideology rather than practical issues could be linked to increasing pressure on the European Commission by MEPs to link EU cash handouts to the rule of law.

Hungary, with its long-time ally Poland, has vehemently opposed this and reports surfaced that Budapest would veto the EU's recovery fund if EU transfers to the country were to be limited or suspended as a result of "vague and undefined interpretations of the rule of law" issues.

The European Commission will publish its first rule of law report within a few weeks and it seems from Commission President Ursula von der Leyen's first state of the union speech that observing democratic values will remain a key issue.

In his writing, Orban took the view that today the greatest threat to national sovereignty is the "global network professing open society which seeks to eliminate national structures".

"The goals of George Soros’s network with unlimited financial and human resources are clear: with the acceleration of migration to create open societies of mixed ethnicity, to tear down national decision-making and to hand it over to the global elite," he noted.

Orban referred to the 2022 elections as a freedom fight with enormous stakes while describing the cooperation of opposition parties "as mixing like a sausage" and accused them of being controlled by Soros.

Opposition parties from left to right expressed their intention to field a single candidate in all constituencies, which could be their only chance in defeating Fidesz, which has sealed the last three elections with a supermajority.

The ruling party still has a comfortable lead in the polls but if opposition voters unite behind single candidates, it could be a close race in 2022, pollster Zavecz research predicted

"Communities which once had identities of their own have been replaced with a leftist People’s Front that eagerly serves the Soros network," Orban said.

The Hungarian prime minister, who was the first European leader to support then-presidential candidate Donald Trump four years ago, has openly endorsed the president again.

"This is why we’re also rooting for Donald Trump’s victory because we know only too well the foreign policy of US Democrat administrations built on moral imperialism. We had a taste of it, and we didn’t like it, we don’t want a second helping," he added.

Orban had no chance to reflect on strategic issues this summer as informal gatherings that serve as a forum for right-wing intellectuals and businessmen were cancelled due to the pandemic. The aim of his long op-ed piece was to fill that void.

US pledges up to €1bn for EU's eastern Three Seas region

Canadian toymaker Spin Master to acquire maker of Rubik's Cube
The billionaires club, where the mega-wealthy go to meet each other
US pledges up to €1bn for EU's eastern Three Seas region

Pro-EU opposition has its best-ever shot at winning the presidency in Moldova
1 day ago
Zelenskiy scrambles to defuse anti-corruption crisis of confidence in his government
18 hours ago
Lukashenko closes borders, sends top aides to western regions to face down faux NATO threat
1 day ago
Sofia streets empty as most of Bulgaria put in coronavirus “red zone”
1 day ago
Russian residential real estate developer Samolet Group IPOs at a price of RUB950 per share
1 day ago