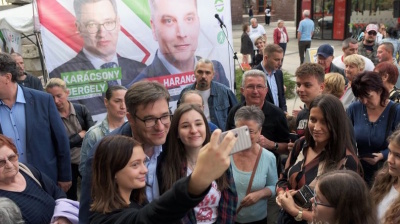 Budapest mayor Gergely Karacsony at a campaign event on September 17, a day before voting on primaries were set to begin.
By bne IntelliNews September 20, 2021

Hungary's first-ever primary election to select opposition candidates for next year's general election had to be suspended on September 18 after a cyberattack. Opposition parties have accused the ruling Fidesz party of hacking the process.

Initially organisers suspected heavy interest behind the system slowdown early on Saturday, but then it became clear that the IT system had come under concentrated attack. IT experts confirmed that it was not simply an overload but a targeted attack, organisers said. Immediate resumption of the primary in its current form would entail technical risks, and the voting would resume on Monday, they added.

After two unsuccessful elections to topple Viktor Orban’s nationalist government ruling with a supermajority since 2010, Hungary’s fragmented opposition teamed up and agreed to run on a joint ticket for the 2022 election.

Opposition parties had no other choice after the Fidesz majority amended election rules last December. For parties to establish a national list, a party must run 71 individual candidates in at least 14 counties and the capital as opposed to 27 previously. Fidesz had also tweaked election rules after taking power in 2010, phasing out the two-round system, and has gerrymandered election districts.

In 2018, international organisations such as OSCE said the election was free, but the playing field was biased in favour of the ruling party due to "a pervasive overlap between state and ruling party resources, biased media coverage and opaque campaign financing regulations".

At the primaries, voters can choose between 253 candidates at 106 districts or 53% of the 199 mandates from September 18 until September 26.

There will be a second round of voting to pick the challenger to PM Viktor Orban. Five prime ministerial candidates have gathered enough signatures to run for the post. A run-off for the top three will take place between October 4-10.

Hungary’s largest opposition party Democratic Coalition will have the most candidates, 60, followed by liberal Momentum (59), centre-right Jobbik (52), the socialist MSZP (39).  Two conservative groups Hungary for all Movement and New World People’s Party will field 22 and 15 politicians in the primaries respectively. Green party LMP has 17 and liberal Dialogue 11 in the race.

In 85 districts, voters can select between 2 or 3 aspirants. In 10, there are four or more running for the post. There will be no competition in 11 districts as rivals agreed to withdraw their own nominees.

Fidesz did not react until Sunday to accusations that it was behind the cyberattack. The ruling party issued a short statement saying 'don’t blame your failures on others'. Pro-government pundits began posting messages on social media with ironic posts saying that if opposition parties were unable to organise a "charade called the primaries", how could they be put in charge of running the country.

Hungary’s state news media did not publish any releases during the day either on the primaries or the ensuing technical problems.