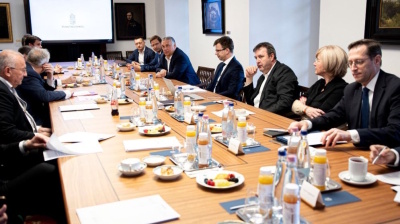 Prime Minister Viktor Orban called a meeting of industry leaders, cabinet members and top advisors to discuss Hungary's energy security in the context of the EU's energy sanction plan.
By bne IntelliNews May 6, 2022

The Hungarian government is threatening to veto the EU’s proposal to ban Russian crude and refined oil imports, while at the same time it is examining proposals to find alternatives to lessen its dependency on Russian energy sources, according to Telex. The meetings, conducted in utmost secrecy, are led by the Ministry of Innovation and Technology.

Government officials have said the EU’s latest plan to impose sanctions on Russian oil would ruin the country’s economy. The proposed embargo "cannot be supported responsibly in its present form" even if it would apply to Hungary from the end of 2023, the government says.

The fundamental problem remains that the government has done little to lessen its dependence on Russian energy sources over the past 12 years; if anything, it has deepened its dependence. Hungary procures 65% of its oil and 85% of its natural gas from Russia, the latter under a new long-term agreement, and the government has increased its dependence on Russian nuclear technology and fuel under  a 2014 agreement in which Russia's Rosatom is building two new blocks at the country’s sole nuclear power plant.

According to people familiar with the inside talks, Viktor Orban's government has also put itself in a difficult position and limited its own room of manoeuvre by a number of policy measures taken over the last decade, including fixing retail energy prices, price caps on fuel and subsidising energy-intensive industries investing in Hungary.

The increase in oil prices would be politically very damaging as keeping energy prices artificially low was an important element of Orban’s re-election campaign last month and that of his government policies over the last 12 years.

Pro-government economists have issued dire forecasts if the EU approves the latest round of sanctions, predicting ballooning energy prices for retail users and industry and runaway fuel prices.

The government is working behind the doors to find alternatives to lessen the country's dependence on Russian gas but these would require investments costing billions of euros and take years to complete, according to experts. They would rely mainly on the EU's RRF fund, which has been put on ice by Brussels due to concerns about Hungary’s rampant corruption and lack of transparency of public procurements.

It is weighing some alternative solutions, such as strengthening the supply of Croatian liquefied natural gas, and the purchase and renewal of gas reserves.

Another option is the construction of the North Italian-Slovenian-Hungarian interconnector, a pipeline that has been approved and is on the European Commission's Projects of Common Interest (PCI) list, eligible for EU financing. In the longer run, probably after 2026, Hungary could receive gas from the delayed Black Sea offshore gas project in Romania.

In the short term, the government remains confident that sanctions would not be extended to natural gas. The 15-year contract with the Russian gas giant Gazprom, signed in October, guarantees the supply of 4.5bcm of gas through Serbia and Austria, bypassing Ukraine.

The contract could be reviewed after 10 years. Budapest wanted to increase gas deliveries through Serbia by 1 bcm per year, and this issue was brought up by Orban during his visit to Moscow in early February, but no agreement was reached. Details of the contract were classified by the government.

Hungary also relies on imported electricity, hence improving energy use would be vital if it wants to meet decarbonisation goals.

The country’s energy strategy relies on two main pillars. Solar energy capacities rose by a record 820 MW to 2,950 MW in 2021, which is half of the capacity targeted by 2030. Solar energy accounted for nearly 7% of electricity generated in the country in 2021, which could be doubled in the next 7-8 years. The government is confident that it could gain financing from projects under the RRF plan, once EU concerns over corruption are met.

The €12.5bn project, to be carried out by Russia’s Rosatom, is at risk because of sanctions, yet the government remains reluctant to cancel the project.

Rosatom executives offered assurances to Hungary at the talks that they remain capable, from a technological perspective, of carrying out the investment, Minister of Foreign Affairs and Trade Peter Szijjarto said after talks with the Russian company's CEO, Alexey Likhachev, in Istanbul.

He added that Hungary's atomic energy authority is weighing applications for permits for the project, and when these are awarded, the construction work at the plant "can enter the next phase".

The two 1,200 MW blocks should have been operational since 2023, but Rosatom has yet to receive the final permits and if all goes well the hope now is that project could be completed in 2030.

State electricity giant MVM has received  EU funds to finance the green transition of the plant by 2030 at the latest in one of the largest energy investments in the country.