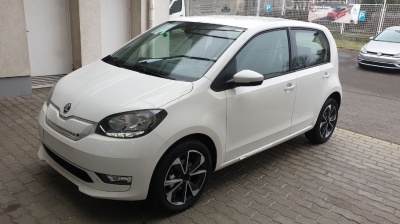 Skoda Citigo model sold for less than €14,900 with subsidies
By bne IntelliNews February 21, 2020

Hungary is planning to beef up subsidies for electric vehicles (EVs) from the current HUF1.5mn (€4,440) and talks are on the way to increase subsidies for cheaper cars.

During his state of the nation speech last week, Prime Minister Viktor Orban said that the government will support the emergence and use of cheaper electric vehicles. Earlier this week when unveiling the government’s climate strategy, Minister of Innovation and Technology Laszlo Palkovics said that the subsidy for smaller and less costly electric cars could be raised.

Hungary was the first in the CEE region to introduce a HUF1.5mn cash subsidy for EVs available to companies, local governments and retail buyers in 2016. The sale of zero-emission cars took off a year later. In 2018 the upper ceiling for subsidies was raised from HUF15mn to HUF20mn and administrative changes were introduced.

The number vehicles with green plates issued last year rose by 7,161 to 16,721 but only 7,432 of them were purely electric vehicles, the rest plug-in hybrids, which are not entitled to state subsidies but do enjoy other benefits such as free parking, or exemption from company car tax and duties. Last year 1,800 EVs were sold, which is only 1.2% of the total 158,000 new car sales.

Skoda's purely electric Citigo model sold out in a matter of weeks, which shows that demand for cheaper EVs is strong, industry experts told bne Intellinews. Volkwagen group allocated 20,000 vehicles for Europe and 200 for Hungary.

With subsidies, the retail price was around HUF5mn, which puts customers at a real dilemma when choosing between EVs and traditional vehicles, said Gabor Gablini, president of the National Federation of Automobile Dealers.

He called for easing administrative burdens as it can take more than six months to have requests approved. Under the government’s car purchase subsidy scheme, which gives families of three or more children a one-off HUF2.5mn for the purchase of a seven-seat car, the waiting period is only two months

The head of the Hungarian Electromobility Association said that those countries that have a transparent and continuous subsidy system can receive higher quotas from manufacturers. Janos Ungar called for maintaining subsidies for higher-end EVs.

The value of subsidies has lost value over the years and other countries in the region offer higher cash subsidies for EVs. In Slovakia and Romania customers are entitled to an €8,000 and €10,000 cash subsidy respectively.

ING: Negative growth for Central and Eastern Europe with more easing ahead

Hungary under fire over legislation that gives sweeping powers to government

ING: Negative growth for Central and Eastern Europe with more easing ahead
Hungary under fire over legislation that gives sweeping powers to government
Balkans have some of the world’s strictest anti-coronavirus measures